A Woman Killed with Kindness by Thomas Heywood. Directed by Eleanor Sax for Theatron Novum at the Burton Taylor Studio, Oxford Playhouse, 25 October 2016 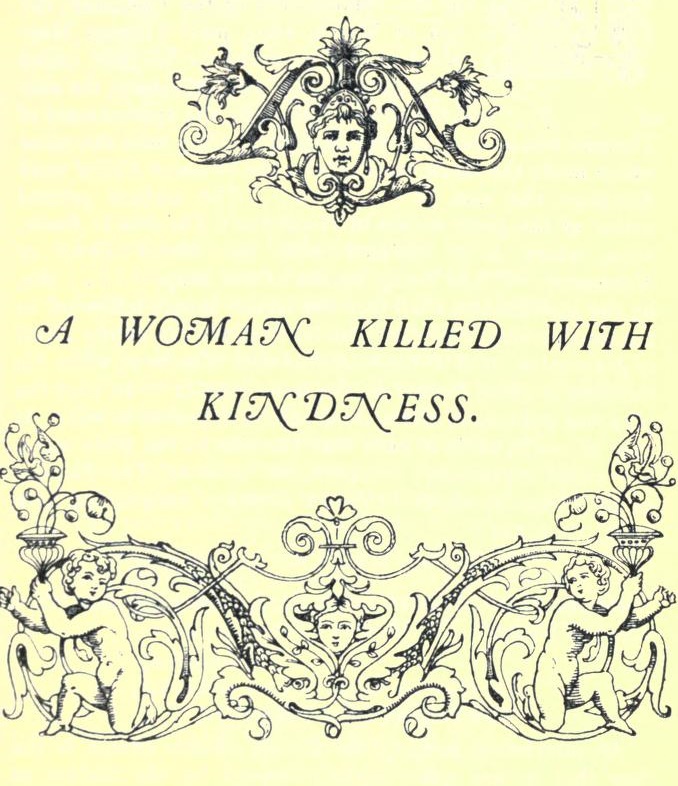 References to the play are to “A Woman Killed with Kindness” and Other Domestic Plays, ed. by Martin Wiggins (Oxford: Oxford University Press, 2008).

This production by Oxford student company Theatron Novum offered a brisk, 90-minute distillation of Heywood’s domestic tragedy. With the entire subplot excised, the play became an intense, tightly-structured drama centred on the triangular relationship of John and Anne Frankford and the seducing interloper, Wendoll. The designer, Marisa Crane, made effective use of the studio space, essentially a small, black box, to create a claustrophobic setting, sparingly but atmospherically lit by Louise Drognat-Landré. With the audience arranged on two sides, the acting area was backed by draped flats, with two gaps at the corner for entrances and exits. The top level of the flats formed a white band, with crimson material buttoned beneath, enclosing the play’s domestic environment in a sense of comfortable but stifling opulence. This was enhanced by the minimal furniture, consisting of a small table, four elegant chairs and a chaise longue, and the carefully chosen props, including books, mirror, candelabra, a bunch of roses and the thematically significant lute. This instrument was represented aurally, too, in the recorded, incidental lute music played by James Bramley, part of a repertoire of sound effects devised by Mark Riley, from wedding bells to hooting owls, that formed a crucial part of the imaginative mise en scène. For the final scene, with the hapless Anne banished by her husband to his “manor seven mile off” (13.164), the red drapes were unbuttoned to reveal an entirely white backdrop, bathed chillingly in blue light.

Crane’s costumes both complemented the setting and hinted at the play’s moral and social concerns. The two servants, Nick and Jenkin, were clad entirely in black, while the other men were distinguished by white shirts set off with black cravats and, in some cases, black waistcoats. Anne, in contrast, the only female character in this compressed version of the play, stood out first in her luxurious crimson dress and later, in the bedroom scene and on her deathbed, in a white shift, highlighting her vulnerable femininity, both sensual and innocent, in the arrogant male world of black-and-white moral certainties. Though not tied to a specific period, the costumes, with their ruches and frills, were redolent of the eighteenth century, perhaps at the French court. The two servants had the air of all-black pierrots, and all the men performed throughout in their black-stockinged feet, protruding from ruffled, upper-ankle-length breeches. The only fault with the costumes was that they did not always fit properly, leaving a number of the actors looking sloppy and uncomfortable.

Heywood’s play, even in this cut-down version, is socially aware, morally ambiguous and psychologically complex. One of its strengths is how seriously it takes the servants, giving weight and value to their lives, their opinions and their moral judgment, often shared with the audience in knowing asides. In the original text there are a dozen or more, male and female, providing a choral counterpoint to the affairs of their social superiors and employers. One of the few successes of Katie Mitchell’s 2011 National Theatre production lay in the strength and experience of Gawn Grainger and Kate Duchêne as Nicholas and Sisly. Here, both Christopher Page as Frankford’s servant Nick and Han Whitmore as Wendoll’s assigned servant Jenkin seemed ill-at-ease. Page began by delivering the Prologue in a hesitant, buttonholing style at odds with the confident, self-conscious theatricality of Heywood’s attention-grabbing sonnet, and both he and Whitmore were required to follow this up by addressing many of their observations directly to the audience. They were also tasked with effecting the scene changes while engaging in improvised banter, but these moments were woefully under-rehearsed and Page, in particular, seemed stilted and uncomfortable. Improvised interpolations need to be delivered with a confident panache; here, they were muttered apologetically. The only time they came near to being witty rather than embarrassing was when Whitmore, having had enormous difficulty in unbuttoning the red drapes for the final scene change, observed to his fellow actor, “If this was a play, this wouldn’t be a very good scene, would it?” All this was a great pity, and seriously diminished the dramatic impact of the servants’ roles. Both actors clearly had potential, but they seemed to have been left largely to their own devices.

More successful were Amschel de Rothschild, Jonny Wiles and Antoni Czerwinski as Cranwell, Acton and Mountford, the last two clinging on to the scant remnants of their subplot roles, now confined to the beginning and end of the play. All three were crucial in establishing the male-dominated social milieu powered by competitive displays of gambling prowess, whether at hawking or cardplay, where losing or cheating are equally likely to have violent repercussions. Most of the hawking episodes from Heywood’s scenes 1-3 were cut, reported only in Wendoll and Anne’s account in scene 4 of their violent outcome. These vestigial remains of the subplot felt awkward, particularly when the subsequent antagonism between Acton and Mountford had been inexplicably resolved in time for them to reappear at Anne’s deathbed. In fact, Jonny Wiles’s performance as Acton almost made one wish the subplot had been left intact. Trained at Guildford School of Acting, Wiles brought a touch of professionalism to a company that often failed to rise above the well-meaning competence of student performers. His Acton was strongly and intelligently spoken, with an authoritative presence and the sense of a real inner-life.

The play’s three leading roles were performed with varying degrees of assurance, but were strong enough to sustain the play’s tense and gripping exposure of marital disintegration. As Wendoll, Tobias Sims seemed more at home in his role than in his costume, which hung on his lanky frame as if on a hanger. With his cheeky, stubbly features and mop of curly hair, a striking contrast to Frankford’s stocky self-containment, it was clear why Anne was attracted to him. At first, though, his performance lacked conviction, and despite the clarity of his speaking he seemed to be imposing the character’s emotional life from the outside rather than motivating his lines from within. In his seduction of Anne, however (scene 6), he gained in psychological depth. Particularly effective was the way he invested Wendoll with a slightly quizzical air, as if he couldn’t quite believe his luck.

Victoria Gawlik’s Anne was at first something of a blank. She seemed uncommitted to her marriage from the start, concealing the reality of her feelings behind a single facial expression and a rather monotonous vocal delivery, as if neutral was her emotional default setting. Like Sims, though, she gained in confidence as it became clear that the audience was engaged and attentive, and she relaxed into Anne’s conflicting impulses and developing guilt with enough conviction to render her repentance and death both touching and moving.

Ultimately, though, the production was lifted to a higher level by Joe Stephenson’s fine performance as Frankford. He came across as just an ordinary guy, amicable, ingenuous and proud of his newly-married status. The relaxed clarity of his delivery suggested the varied inflections of natural speech which, like Heywood’s verse, could rise effortlessly to the poetic. Most importantly, he created a rich emotional subtext to the lines and, unlike some of his fellow actors, there was life behind his eyes. Beginning with an attractive lightness of touch, Stephenson charted Frankford’s shift from the geniality implicit in his name to disillusionment, deviousness, anger and regret with great skill, creating some powerful scenes along the way. His response to Nick’s revelation of Anne’s infidelity balanced the character’s deep sense of shock and betrayal with the poetic resonance of the lines: “Drops of cold sweat sit dangling on my hairs | Like morning’s dew upon the golden flowers” (8.57-58). His sustained immersion in the character rendered the discovery scene both moving and dramatic.

I charge thee never after this sad day

By word, or writing, gift, or otherwise

To move me, by thyself or by thy friends,

The text here is rich, complex and interesting, with its syntactical incompletions, its repetitive, insistent rhythms, its grammatical structures of command and its patriarchal appropriation of the children. These features are undercut, however, by his referring to Anne by the familiar and affectionate “thee” and “thy”, and the touching understatement of “this sad day”. If Stephenson didn’t get across every nuance of this – who could? – he did at least manage to evoke a complex response to Frankford’s emotional turmoil. It was refreshing to see Frankford portrayed sympathetically rather than, as in so many modern critical and theatrical interpretations, as a complacent embodiment of male control.

Sax’s production contained many felicitous touches, as well as some miscalculations and an unfortunate first-night gaffe relating to the returning of Anne’s lute to her on her journey into marital exile. One of the play’s most acute staging challenges is the card game in scene 8, with its archaic terminology obscuring its tightly-orchestrated, bawdy wordplay.

CRANWELL  Gentlemen, what shall our game be?

ANNE  I can play at nothing so well as double-ruff.

FRANKFORD  If Master Wendoll and my wife be together, there’s no playing

against them at double hand.

NICHOLAS  I can tell you, sir, the game that Master Wendoll is best at.

WENDOLL  What game is that, Nick?

Sax managed this sequence effectively to create both tension and laughter, as Heywood surely intended, with the actors’ intensity of concentration easily overcoming the difficulties of the impenetrable card-playing jargon.

Finally, in a brilliant touch of her own, Sax framed the play’s narrative within a representation of Frankford and Anne’s wedding as a series of snapshots set against the ominous chiming of bells. At the end, however, the concluding snapshot removed Anne from the picture, leaving Frankford isolated and bereft. The subsequent, jingling Epilogue, competently delivered by Tobias Sims, was an unnecessary addendum to this thoughtful and absorbing production.

The views expressed in this post are the author’s own.

Reviewing Shakespeare is produced by the Shakespeare Birthplace Trust and the University of Warwick to provide a searchable archive of independent reviews of worldwide Shakespearian performance.

Peter Malin is an independent scholar with a particular interest in the performance of early modern drama. He has contributed articles and reviews to ROMARD, Early Theatre, Cahiers Elisabethains and Shakespeare, and is the author of A Level Student Text Guides on The Winter's Tale, The Alchemist, 'Tis Pity She's a Whore, The Duchess of Malfi and The White Devil. He is a retired teacher, and is actively involved in amateur theatre as both actor and director, including many productions for Oxford Theatre Guild and the Shakespeare Institute.
View all posts by Peter Malin →