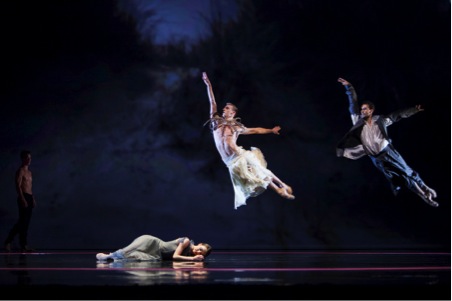 Pastor’s ballet took up various themes implicit in Shakespeare’s text, including the colonial one, but concentrated on Prospero’s struggle to give up Miranda. Accordingly, most characters were omitted: of the castaways, only Ferdinand, Trinculo and Stephano remained. As Old Prospero reminisces, the events of his younger days are played out before him by the dancers. At the start, he sat inside a red circle on an otherwise bare dance floor, leaning against a dead tree, as in the cartoon cliché of the castaway. At first, all was peaceful. Thomas Tallis’s heavenly music was heard; a video projected against the backdrop showed waves rolling into shore, which were also reflected on the shiny surface of the dance floor. Yet this peace was short-lived: the music changed to Purcell’s overture for the operatic Tempest, and more disturbing images replaced the sea-scape, including an eye in close up, and a woman leaning against a huge living tree. Perhaps the latter was intended as a counter image to the dead tree of Prospero, whose masculine power has not created life but death.

Old Prospero did not dance himself, but with an Iranian hand drum called a daf, he conjured up a storm, represented by a dozen blue-skirted dancers incited by Ariel. By their waving and undulating movements they suggested the roaring waters, and ended by carrying in two castaways on their hands: Young Prospero and Miranda. The prehistory, which in Shakespeare’s text is narrated by Prospero, was here enacted by the dancers. Miranda was taken care of by Caliban, a muscular dark-skinned young man with a naked torso, whereas Ariel looked after Prospero. The other islanders, who resembled Caliban, marched around the stage in single file. Caliban and Miranda’s dance together showed they were falling in love, but Prospero intervened. In a violent dance, not unlike a display of martial arts, he tried to keep Caliban and the other islanders outside the circle, which now served as the sorcerer’s magic circle and as a symbol of white privilege. Although at first Caliban and the islanders stayed outside the ring, while Miranda freely moved in and out, gradually they did venture inside. This caused more wild dances, suggestive of conflict, between Prospero and Caliban, but Ariel intervened to calm them down. Prospero also had an antagonistic dance with Miranda, caused by her anger over his possessiveness and the exclusion of her lover.

All this was watched from the side-lines by Old Prospero, who with his daf conjured up another storm, like the first. This time it was Ferdinand, Trinculo and Stephano that were washed ashore. The focus was on Ferdinand, who awoke to be consoled by Ariel, while a tenor sang ‘Full fathom five’. Young Prospero appeared with Miranda, alternately pushing her towards Ferdinand and pulling her back. Sometimes his dance recalled his aggression towards Caliban, at other moments he granted Ferdinand access to Miranda. His movements rendered his inner conflict between his possessiveness and the political need to marry off his daughter.

Once again, Old Prospero conjured up a storm. Again, Ferdinand, Stephano and Trinculo were carried ashore, but this time the focus was on the sailors, and their first contact with Caliban. After initial mutual amazement, they started hitting Caliban in their dance, abusing him as a colonial monster. They were far from dignified themselves, as they sometimes moved on all fours, belly up, intertwining their lower bodies, reminiscent of the four-legged monster of The Tempest 2.2. From repressing Caliban, they moved on to trying to teach him and his fellow islanders European manners, in a comic dance with pompous courtly movements such as reverences and elaborate hand movements. Yet they were persuaded by Caliban to join his rebellion against Prospero. They got very far in their attempt, much further than Shakespeare allowed them, isolating Prospero so that they seemed to have him at their mercy. But then Prospero used magic to call a troop of dancers with dogs’ heads to his aid. The video in the background showed footage of foaming watchdogs, symbolising his desire for punishment. But again Ariel persuaded him not to pursue his plans too far, and to call off his dogs. Miranda and Ferdinand were now allowed to consummate their love, in stylized form. This was only possible, however, once the dead tree was removed, which by now was lying flat on the floor. The lovers mimed trying to lift its huge weight; but only when they had given up the attempt did the tree rise above the floor by itself, lifted to the ceiling by invisible cables. Caliban watched their dalliance from outside the circle, perhaps jealous, but without intervening.

Ultimately, Old Prospero returned once again to the circle, and allowed Caliban to divest him of his mantle of power. Then he collapsed: perhaps it was his death, perhaps only a sleep he sank into.

This ballet version transformed Shakespeare’s play considerably. The political element of Prospero’s revenge on his enemies was reduced to his dealing with Trinculo, Stephano, and Caliban. Most attention was given to the emotional conflicts in his relationship with his daughter. Miranda’s relation to Caliban was a genuine love affair, but under her father’s pressure she chose Ferdinand instead. Prospero found it hard to control his jealousy towards his daughter’s lovers, and had to be calmed down by Ariel. The colonial situation was less ambiguous, as Trinculo and Stephano were clearly abusive, and Caliban’s grudge entirely understandable. At the end, Prospero accepted that his daughter’s marriage meant that his time was over, and that he must prepare for death. Underlined by video images and by music by Henry Purcell, Robert Jonson, and the contemporary Dutch composer Michel van der Aa, this production turned The Tempest into an intimate script about family entanglements, rather than the deeply politicised performances that have become the norm.

Paul Franssen (1955) teaches at the English Department of Utrecht University. His main research and teaching interests are Shakespeare and the early modern period, South African Literature, Jane Austen, and Oscar Wilde. He has co-edited a few books on Shakespearean matters, and is the author of Shakespeare’s Literary Lives: The Author as Character in Fiction and Film (Cambridge University Press, 2016). www.cambridge.org/9781107125612
View all posts by Paul Franssen →