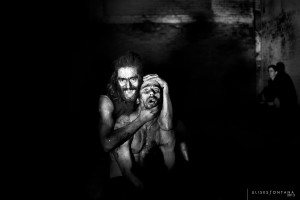 On the occasion of the 450 anniversary of Shakespeare’s birth, the Almagro International Classical Theatre Festival offered eleven productions of his plays – six productions at the official programme and five at the Almagro Off, a contest for new creators established in 2011. Apart from the productions themselves, the festival also held two exhibitions related to Shakespeare: Vestir a Shakespeare [Costumes for Shakespeare], and Shakespeare danzas y regocijos [Shakespeare dances and joys]. In the official programme, productions such as Los Macbeth, directed by Andrés Lima, with Carmen Machi and Javier Gutierrez in the title roles, or Othello, by the company Noviembre Teatro, are a good example of how Shakespeare has been performed on the Spanish stage in recent years. Whereas the first one offers an updated version of the play, moving the Shakespearean tragedy to present-day Galicia (the Spanish equivalent to Scotland thanks to its forests and meigas[1]), the other is an abridged version of Shakespeare’s play which deploys a mixture of contemporary and classic costumes and props, creating a timeless setting for the play.

In contrast to the official programme, the Almagro Off features more avant-garde and risky productions from new directors. A good example of this is Hambret, by the company Laboratorio Teatro, based in Barcelona and directed by Jessica Walker. The title is a combination of Hamlet and the Spanish word “hambre”, hunger in Spanish, suggesting that the performance focuses on people’s constant search for the satisfaction of their basic needs.  The production attempts to dismember the text at the same time that it brings to life all the violence underlying human relations, in particular when love comes into view. The process of dismembering the Shakespearean play takes place as the plot is deconstructed; the performance not only does not remain close to the original play script, but it changes the order of the scenes and acts. Even though Shakespeare’s words are only used in some key instances, such as in the “To be or not to be” soliloquy, some of the topics of Hamlet dominate the production; love, violence and betrayal are the main issues addressed by the physical presence of the actors on the stage.

Hambret combines strong visual instances of violence – with the actors slamming the floor with their leather jackets, jumping, running, shouting and throwing sand all over the stage–, and more intimate moments with the performance of a monologue or a short scene following  –although not necessarily– Shakespeare’s text. The production works partly as a work-in-progress, given that what happens during those moments of violence is spontaneous. These instances of violence separate the different monologues and dialogues that form the text-based part of the production; far from being used as a mere form of transition, they also invite the spectator to think about how violence is expressed. Although these transitions are choral, no more than three actors take part in the text-based scenes. Monologues and scenes with two characters prevail, with the scene of Hamlet and Gertrude being a key moment. Another remarkable scene is the one re-imagining Rosencrantz and Guildenstern, performed by two women who reflect on identity and seduction using improvisation techniques while they address the audience directly.

The cast is composed of ten actors whose different backgrounds are soon foregrounded, as their accents and identities have a central role. An example of this is the actor playing Hamlet, who recites the “To be or not to be“ soliloquy in French, his mother tongue. Rosencrantz and Guildenstern also use Catalan and English in their discourse, and several Latin American accents come into view in the performance of different actors. Coming from a specific place or being an actor –a common condition to all of those on the stage– are some of the issues raised for the audience’s reflection.

Apart from using strong visual language, other senses are involved. Smell is essential to the creation of the ambience, as incense bars are burnt during the show. Different levels of sensations arise: images of violence, the sound of accents and the smell of incense. The inclusion of these elements evokes ancient rites; in fact, the ritual features are enhanced by the presence of the bodies on the stage, using physical theatre techniques closer to those of Jerzy Grotowski. The constant presence of the director next to the stage, together with her intervention asking a question to one of the performers, recalls of Tadeusz Kantor, another Polish director. Departing from the Eastern European tradition of physical theatre and close to post-dramatic approaches, this production situates itself in the avant-garde, and reminds us that traditional forms of performance were destroyed long ago in favour of new theatrical forms.

The award of the Almagro Off was not for Laboratorio Teatro, but for another company staging Shakespeare: Los Colochos Teatro, a Mexican company presenting a version of Macbeth under the title Mendoza. This version places the story in the Mexican Revolution of 1910, mixing Mexican traditions, history and even national literature (there are several references to Juan Rulfo and Marta Garro). Macbeth is depicted as the general José Mendoza, who ends being major of his regional division after Ducan´s death. The actress in the role of Lady Macbeth – here called Rosario Mendoza – also plays the only witch of the production, who uses typical imagery of Mexican witchcraft such as cockerels to exert her power over Mendoza. The ambience of the production is completely Mexican; the last scene shows the actors – except the one in the role of José Mendoza, who lies dead under a table – singing a ranchera[2] and offering Mexican beer to the audience, subtlety recalling Elizabethan stage jigs.

This is not the first time that a Shakespearean production by a foreign company wins the Almagro Off. In 2012 the Italian company Copione won the award with Giulio Cesare, an adaptation of Julius Caesar. The fact that the plays of the Almagro Off have to be based or inspired in works written in the “Universal Baroque”, that is, between the second half of the 16th c. and all the 17th c., seems to raise the amount of Shakespearean productions, in particular in the case of international new directors, who rely on Shakespeare´s works to present their innovative approaches.

On the other hand, the exhibition “Vestir a Shakespeare” stands in contrast to most of the Shakespearean productions in the festival, as it exhibits the costumes that many acclaimed designers from the forties devised for Shakespeare´s productions shown on the Spanish stage. By comparing the exhibition and Hambret we can see how theatre costumes have evolved in the history of staging Shakespeare in Spain: whereas many of the costumes in the exhibition imitate Elizabethan attire, in Hambret actors wear modern dress with some hints of classical costumes, such as the scarves worn by the male actors. The second exhibition, “Shakespeare danzas y regocijos”, is perhaps closer to the production by Laboratorio Teatro. It is a collection of 50 illustrations by the artist Pablo Márquez based on The Tempest, A Midsummer Night´s Dream and different flowers and plants mentioned in Shakespeare´s plays. The illustrations mix different techniques with a predominance of collage. The series on The Tempest is based on war maps from the 16th c., the A Midsummer collection uses 17th-century ballet designs, and flowers and plants are combined for the last series. The illustrations mix Shakespeare´s quotations, collage and drawing. The effect of this mixture of techniques is similar to that of Hambret in the sense that both the theatrical and pictorial productions attempt to create a renewed vision of Shakespeare; it does not matter whether the main focus is on violence or on visual beauty. Both the exhibition and the production are an example of how artists from different fields use Shakespeare to give rise to their own personal interpretations of the works of the English poet. Two exhibitions and eleven theatrical productions, thirteen different views on Shakespeare in total, have turned The Almagro International Classical Theatre Festival into a real celebration of Shakespeare´s 450 anniversary.

[1] Meiga is the name used to refer to witches in Galicia and other regions in the north of Spain.