Two popular casting trends in recent years of Shakespeare productions are star-driven—in which a major star, often from film or television, plays the main role—and small cast—in which a cast much smaller than expected somehow manage to cover all (or most) of the roles in the play through doubling and tripling, sometimes with the aid of costume markers such as hats or vests. Both of these casting trends were, rather unusually, combined in the Almeida Theatre’s production of Richard II, starring the great Simon Russell Beale, CBE, in the title role, while a mere seven other actors struggled to cover the other thirty-eight roles in the play—or not cover them, as many were unceremoniously omitted from the production. Despite a strong performance by Beale in the title role, this production fell short, failing to deliver the play’s story effectively due to distracting choices, severe cutting, and a lack of distinction among the play’s important supporting characters.

After the audience was warned for the third time that there would be no interval, the house lights faded, painfully loud bass notes sounded over the sound system, and the cast appeared. Dressed in black clothes (some in ill-fitting black clothes) that suggested a rehearsal more than a celebrated production at a major London theatre, the entire cast except for Beale first lined up and turned their backs to us, then crowded awkwardly into a corner. Beale, meanwhile, took center stage and quoted part of Richard’s soliloquy that begins “I have been studying how I may compare / The prison where I live unto the world…” (5.5.1-2). This beginning was an accurate prologue to the evening’s show: director Joe Hill-Gibbons made the play about the (largely interior) struggles of one man, with the rest of the characters literally fading into the background for most of the performance. 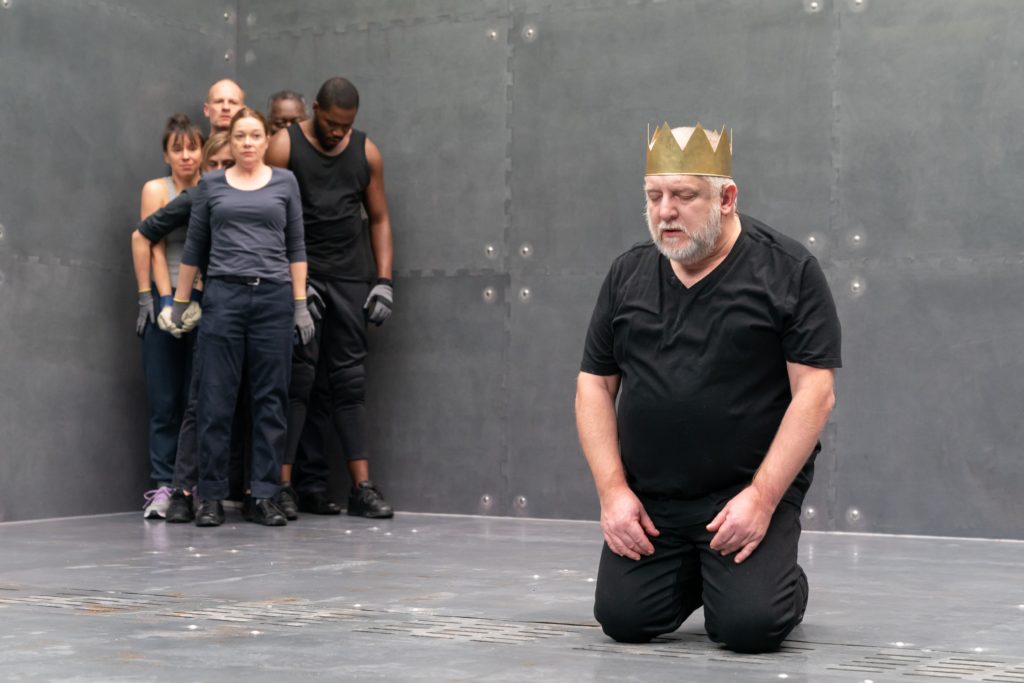 Richard (Simon Russell Beale) speaks a soliloquy about his being alone in prison. The rest of the cast look on. Photo: Marc Brenner for Almeida

Only Leo Bill as Bolingbroke was able to create a character that could hold the stage with Beale’s Richard—and even then, Bill was directed to play the character as tentative, nervous, and angry to create a better foil for the self-assured, confident, and haughty king. Bolingbroke’s banishment was oddly accomplished by having him kneel center stage while all other actors—not in the role of any recognizable characters—showed him disrespect. Later, Bolingbroke knelt upstage left during his banishment, but various characters would still mark him when he was spoken of. 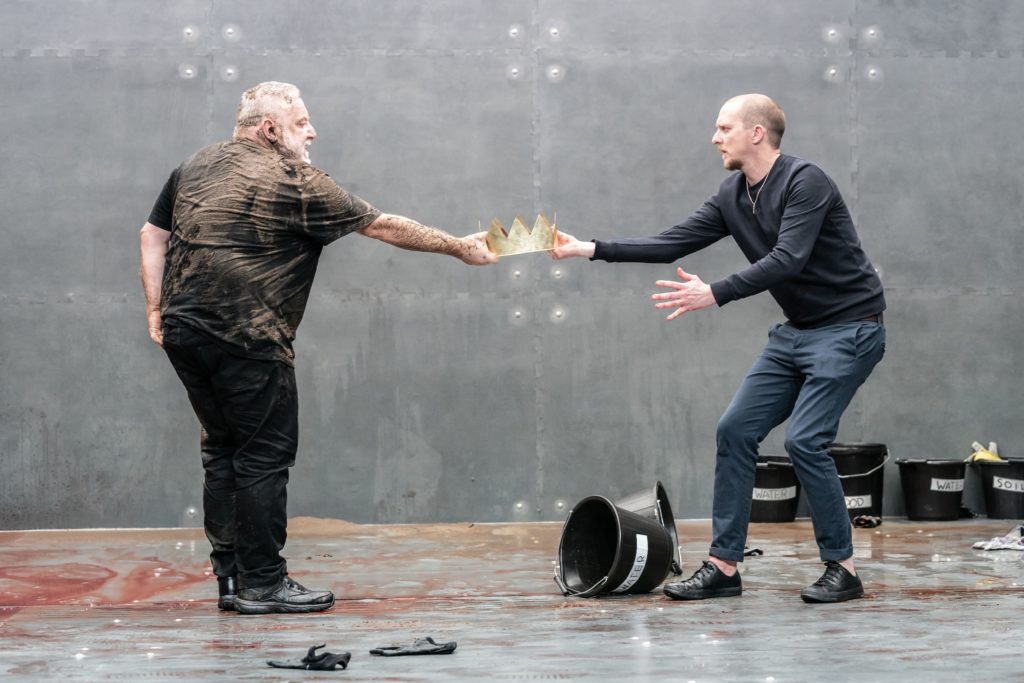 In one of the more famous moments from the play, Richard (Simon Russell Beale) and Bollingbroke (Leo Bill) struggle for the crown. Buckets conveniently labeled “blood,” “soil,” and “water” litter the stage for no apparent reason. Photo: Marc Brenner for Almeida

Other characters, including the pivotal roles of York, Northumberland, and Aumerle, were not really recognizable. The actors were called on to play so many roles—or to say lines written for roles that were not specifically cast—and to carry out so much stage business—much was made out of kneeling, turning backs, and walking in circles—that the audience could scarcely keep straight who was who, let alone understand their motivations or loyalties. Though it was rather effective to have the actor playing York to deliver the news (in lines assigned to Scroop) that York had “joined with Bollingbroke,” a similar moment when the actors playing Bushy and Bagot deliver the news of the deaths of those characters was probably lost on anyone without an intimate knowledge of the play, as those names meant very little in the severely cut version of the text that was presented.

Clearly, Hill-Gibbins (and presumably Beale) intended for this production to be all about the title role. And Beale delivered on an emotional level. The solipsism, frailty, and insecurity that overtakes Richard in the latter part of the play was effectively portrayed—as expected—by the talented and experienced Beale. Nevertheless, the play was done a disservice, since the play is not supposed to be all about one character. Shakespeare’s history plays always—without exception—are about a community of people trying to find their way during times of confusion and change. The response of the subjects to whatever changes are made in the rule of the state are examined closely. Shakespeare especially highlights certain individuals who are forced to choose between the public good and their own private good. Perhaps the best example of this conflict in all of Shakespeare occurs in 5.2 when the Duke and Duchess of York discover their son’s involvement in a plot to kill the newly crowned Henry IV. The Duke makes haste to tell the King, while his wife uses every ounce of her strength to hinder her husband’s mission and to beg the King for clemency. This scene shows a mother begging abjectly for her son’s life—for her personal good— while her husband, the son’s own father, demands his son’s death—for the sake of the public good. In Hill-Gibbins’ production, the scene was severely curtailed, and seemingly motiveless: two cast members were begging against each other for whatever reason, and the king’s decision seemed arbitrary. The moment was in concert with much of the ending of the play, which seemed intent on relaying a feeling of chaos. A strange moment in the 4.1 involves several nobles challenging each other to duels, involving the throwing of “gages” (i.e., gloves) on the ground. In this production, the challenges quickly devolved into a ridiculous torrent of gloves thrown randomly by all the supporting cast members.

Thus, by the time Beale delivered the full version of the speech previewed in first moments, the audience had lost sympathy for any character other than Richard. The speech was moving, evoking sympathy for a man who had brought almost all of his troubles on himself. The programme featured a section entitled “Stories from Solitary Confinement,” with writings by inmates in American prisons—inmates who had, like Richard, been imprisoned in a place where “not a creature” present but themselves. One of the inmates, William Blake, described “times so difficult and . . . boredom and loneliness . . . so thick it felt like it was choking me, trying to squeeze the sanity from my mind, the spirit from my soul, and the life from my body.” Clearly, the production tried to create empathy with Richard in his solitude and, by extension, empathy with prisoners who suffer what Blake called “a sentence worse than death.” However, Richard’s plight, one is invited to understand, is not really so bad as he thinks it, since he is in fact allowed a visitor, not to mention the music he is sent and the rather kindly keeper—none of which are afforded Blake. Also, the lonely imprisonment of Richard lasts for precisely one scene of the play—a play that, as mentioned before, chooses to interrogate the decisions, loyalties, and sufferings of the king’s subjects more than it does those of the king.

As another programme note, “The Impossibility of Power,” pointed out, “Poor political leadership may be the predicament of our time but, as Richard II shows, not just of our time.” The essay’s author, Phillip Collins, drew some insightful parallels between the play’s time and our own, reflecting on “the location of legitimate authority” and “what happens when leadership ends.” Collins closes with a statement equally applicable to the world of the play and to more than one 21st-century democracy: “Everywhere rancor and unreason reign, and the only answer to terrible leadership is not authoritarian leadership but better leadership.” However, the production seemed to ignore the political aspect of the play, and what was there seemed to imply that individuals have no chance to make a difference in the chaos that comes with times of political uncertainty. That message, driven home to this American reviewer or to the overwhelmingly British audience at the Almeida, would have been rather depressing in such a time as this, had it been clearly communicated.

This reviewer is not really a fan of either star-driven productions or small-cast productions, both of which might serve the economic ends of a theatre company, but often do a disservice to the overall experience. If Almeida hoped to combine the box-office draw of a big name while saving on salaries with the small background ensemble, they perhaps succeeded, as performances were sold out weeks in advance. If the theater hoped to communicate the themes of Richard II, they mostly did not, opting instead for a focus on a modern idea of the individual that neither did the play justice nor edified the audience much.

The views expressed in this post are the author’s own.

Reviewing Shakespeare is produced by the Shakespeare Birthplace Trust and the University of Warwick to provide a searchable archive of independent reviews of worldwide Shakespearian performance.