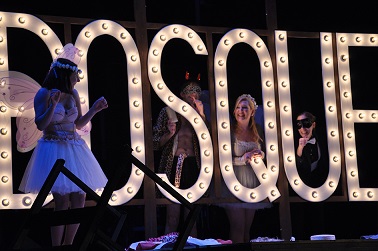 On the evening of the 17th of July 2015, the Festival International de Teatro Clásico de Almagro presented the performance of Las Alegres Casadas by the companies Tdiferencia and La Nave Teatro, directed and adapted by Andrés Lima from Shakespeare’s The Merry Wives of Windsor. The production was placed in the Espacio Miguel Narros, one of the open-air venues of the festival situated at the intersection of two streets surrounded by some of the emblematic sixteenth century buildings of the town. Lima, one of the best-known theatre directors in contemporary Spanish theatre, has regularly staged Shakespeare’s plays, including this one, which he directed for Le Comedie Française in 2009. In contrast to his previous production of the title, more in the style of the French company with a large cast and including all the plots in Shakespeare’s text, this new work is performed by five actors who impersonate ten characters and focuses on the main plot involving Falstaff and the merry wives.

Little of Shakespeare’s only English comedy remains truly English here. Whether the action, according to the dialogues, takes place in Windsor, the mention of the locale disappears from the title in order to, if not explicitly re-contextualise the action in present-day Spain, at least bring it closer to the audience. As Lima states: “[It is] Windsor, England, at some point in the early sixteen century. And, however, it could be Teruel, Spain, at some point in the early twenty-first century. Or Seville, or Pamplona or Amsterdam or London or Madrid: anywhere where there is desire, morals, game and interest.”[1] Even though the action could take place anywhere, the character of Falstaff acquires new meanings on the twenty-first century Spanish stage. As someone who tries to enjoy himself at the expense of deceiving others, the character brings to mind the numerous cases of political corruption in the country. Spectators unfamiliar with the character get to know his personality from the very first scene: the production opens with the stage in darkness while sexual moans and laughs are heard and, as the lights progressively turn on, Falstaff comes into view in an explicit sexual position with one of the ladies at the Garter Inn, while two other female characters drink and cheer with him. The conversation between Falstaff and the host of the inn, here one of the ladies, reveals that this is a meeting of old friends and, together, they remember that old story of Falstaff and some merry wives of the town that took place years ago. This opening scene serves as an introduction for the adventures of Falstaff and the merry wives. 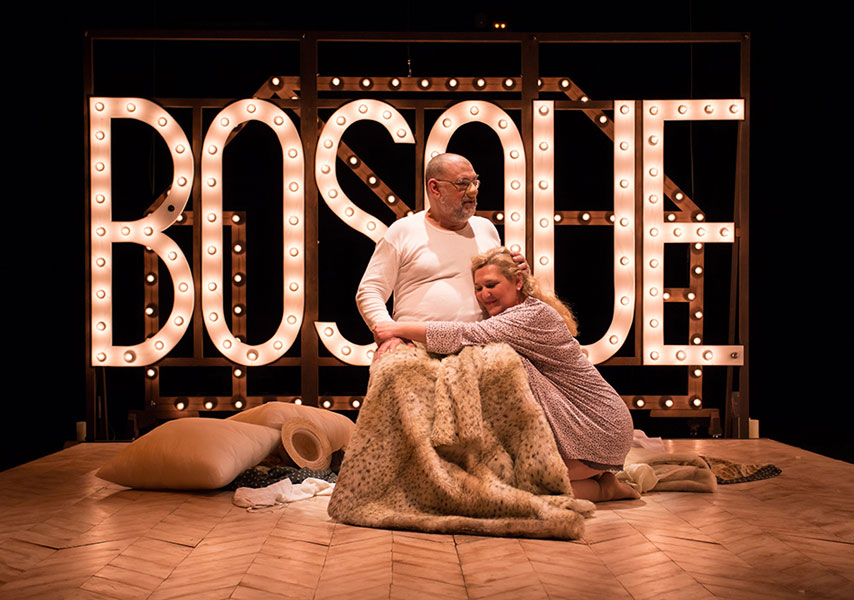 The production relies on the representation of the characters and on references to popular culture to update the comedy and compensate for the loss of most of the puns and linguistic jokes of Shakespeare’s text. The names of the characters are altered: Alice and Frank Ford are Barbara and Francis, and the Pages change their surname to Ferrari. All the actors, except the one performing Falstaff, play several roles. The wives are the two ladies at the Garter Inn, which appears as a kind of brothel, Francis Ford is also a drunken costumer at the inn, and the host and George Ferrari are played by the same actress. The performance of most of the characters is farcical, with the exception of Falstaff and the wives, played in a more realistic style. Mr Ford is a histrionic jealous husband whose alter ego – here the Frenchman Maese Cendrier instead of Mr Brook – is even more excessive; and the actress performing Mr Ferrari does not play the character as a man but, rather, as the stereotype of a man performed by a woman. Apart from renaming the Pages as Ferrari, identifying both families with the popular car brands, other references to popular culture include the name of the Fords’ servants (Julio César, Marco Antonio, Valentino and Giorgio Armani, names that Mrs Ferrari and Mrs Ford seem to deliberately make up when they call for them to carry the basket where Falstaff is hidden); and the allusion to two of the Ford brothers, John and Henry, guarding the entrance at Falstaff’s second visit, as the third, Harrison (Ford) has not arrived.

Other influences from popular culture can be observed in the set and the soundtrack. The former is composed of three sets of marquee lights, as those in old-fashioned movie theatres and cabaret shows, which are used to locate the onstage action. A marquee light with the word ‘bar’ in capital letters places the action at the Garter Inn, Ford’s house is represented with a marquee light in the shape of the sketch of a house, and the last location in the forest is indicated with the word ‘bosque’ [forest]. The marquee lights are movable, and they are brought to the foreground in the transitions between scenes to change the location. The soundtrack, with songs from Paolo Conte, Patty Pravo or the Rolling Stones, among others, not only accompanies the action, but it also comments on it, as happens, for instance, when the wives enthusiastically decide to exact their final revenge on Falstaff with the lyrics of the Rolling Stones’ song Satisfaction (“I can get no satisfaction”) in the background. 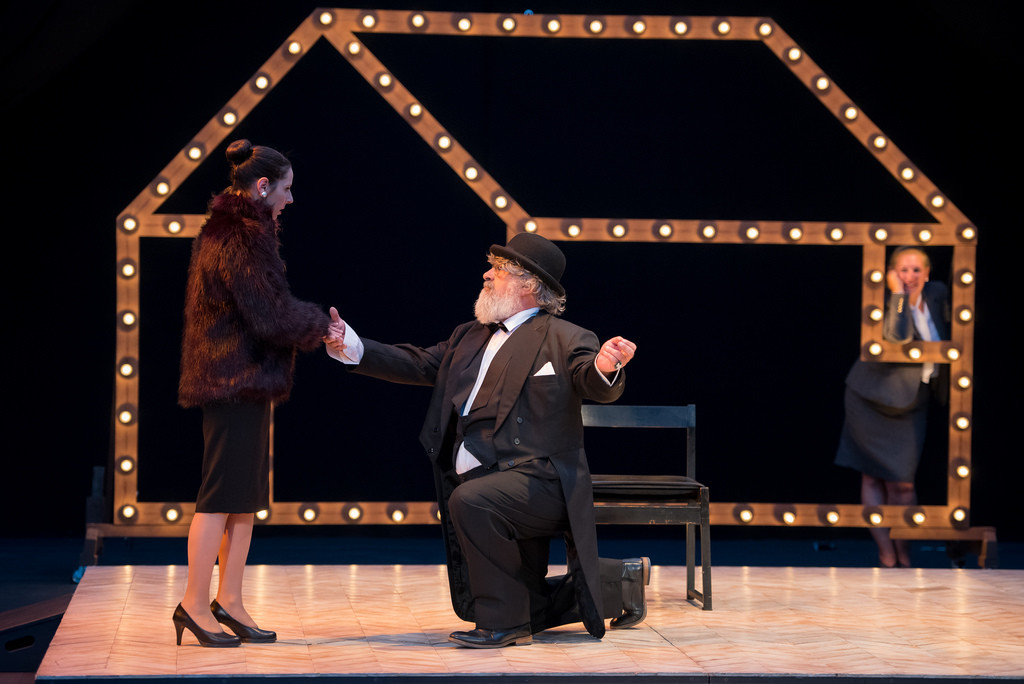 The forest scene is turned into a kind of costume party in which the characters disclose their true self. The scene begins with a striptease by Mr Ford changing his suit for a leopard dressing gown, and continues with him and Mr Ferrari – whose ambiguous gender identity is intensified as he enters in high heels – dancing together. The wives join the party wearing child-like fairy costumes, resembling a caricature of the usually more stylised representation of fairies in A Midsummer Night’s Dream. Once the couples have executed their revenge on Falstaff, Mrs Ford, who seems to have taken a bit more of pleasure at Falstaff’s visits than would have been expected, waits until everyone has left to tell him goodbye. The melancholy of this farewell vanishes with the return to the situation in the opening scene, with a happy Falstaff who, surrounded by his friends, has been remembering this old story of the merry wives.

If a new title for this production had to be chosen, one mentioning the location of the action as Shakespeare’s play does, this The Merry Wives would not be of Teruel, Seville, Pamplona, Amsterdam, London or Madrid, as the director suggests. The performance under the stars at the Espacio Miguel Narros, with the presentation of the story as Falstaff’s memories, the festive tone of the whole play and the production ending at almost one o’clock at night, plus the inevitable association of the fake fairies with those in Shakespeare’s most popular comedy, turn this production, or at least this performance in Almagro, into The Merry Wives of a Midsummer Night’s Dream.

SEDERI is the Spanish and Portuguese Society for English Renaissance Studies. The Society has as its main aim to encourage scholarly research on the English language, as well as its literature, history and culture of the 16th and 17th centuries. Since its foundation in 1990 SEDERI has organized an annual conference in several Spanish and Portuguese Universities. Between 1990 and 2004 the association published the contents of these conferences in an annual proceedings volume. After that date the Proceedings have been replaced by a Yearbook featuring long articles, notes and book reviews on varied topics in Renaissance and Restoration studies. The SEDERI Yearbook has become a reference for English studies in the early modern period produced in Spain and Portugal. It also includes contributions by scholars worldwide. SEDERI encourages exchange between academics interested in this field of studies, as well as agreements with associations with similar interests. SEDERI counts among its members more than two hundred academics from several countries, and welcomes new members. Website: https://www.sederi.org
View all posts by SEDERI →