‘Know us by these colours’: Oregon Shakespeare Festival 2016Festivals

‘Know us by these colours’: Oregon Shakespeare Festival 2016

Oregon Shakespeare Festival (OSF) in Ashland, Oregon sparked considerable controversy last year when they announced their “Play On!” initiative, whereby current playwrights and dramaturgs are being commissioned to “translate” the plays attributed to Shakespeare into twenty first century English.  According to the OSF website, “By seeking out a diverse set of playwrights (more than half writers of color and more than half women, we hope to bring fresh voices and perspectives to the rigorous work of translation.” OSF’s commitment to diversity emerges also through its current “Access for All” program which plans to transform its campus spaces, including some theatre buildings, in order to welcome more performers and audience members with physical limitations and its “American Revolutions” series, which has contracted with a number of playwrights to create new plays based on pivotal moments in American history.  Most recently, this program introduced Lisa Loomer’s “Roe” (2016) and Lynn Nottage’s “Sweat” (2015), plays that placed socioeconomic diversity into conversation with other significant contemporary social issues.

OSF’s endeavors to bring people from numerous cultures and backgrounds into their company and their audiences frequently succeed.  In many respects, they serve as a model for this kind of expansive innovation that brings vital new perspectives to the fore through both classic and contemporary drama.  Inevitably, such undertakings do not always ring true, as the 2016 OSF Shakespeare season demonstrates. Including a range of iconic and less familiar texts (Hamlet, Twelfth Night, Winter’s Tale, Richard II, and Timon of Athens), this season brought a number of diffuse elements together in productions that both resonated with audiences and largely fell flat.  The season illustrated how a company’s range of performance choices can lead to invigorating experimentation or create productions whose concepts could well have been sent back to the drawing board. 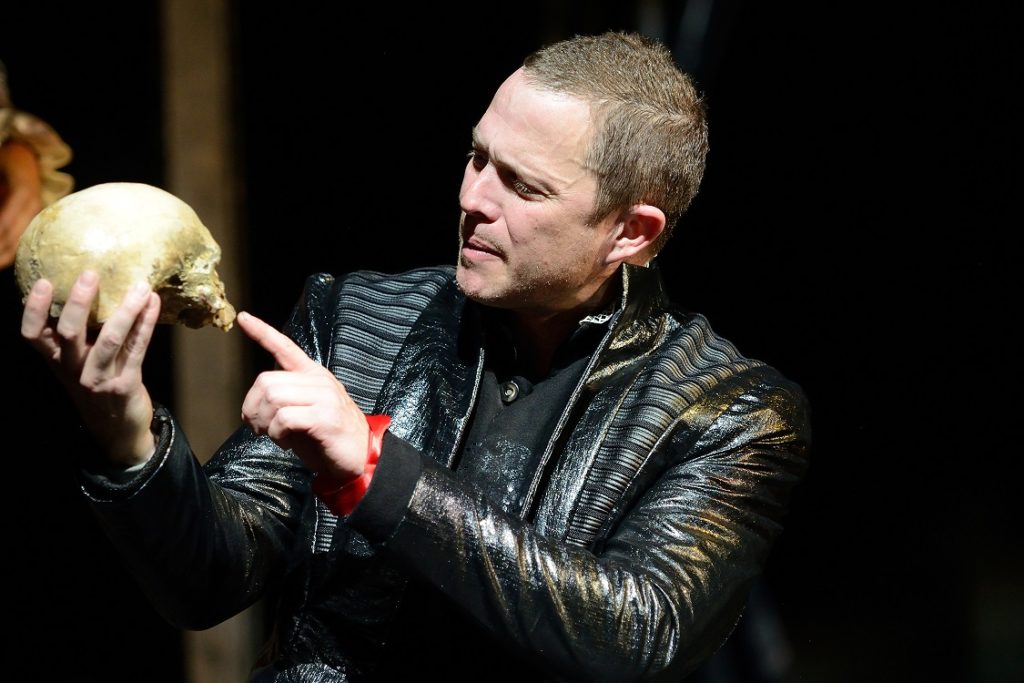 Lisa Peterson’s production of Hamlet, for instance, was a vibrant crowd-pleaser that brought energy and insight to this well-known text.  The noticeably young audience was buzzing before the show and during intermission, but stayed completely silent as this lengthy drama unfolded.  Peterson’s Elsinore was filled with guitars and the audience was clearly eager to experience a Hamlet infused with “Doom Metal.”  This energetic presentation took full advantage of the outdoor Elizabethan stage, using its multiple levels, lighting opportunities, and musical staging possibilities to great effect.  Danforth Comins’ impressive Hamlet was supported by a uniformly talented acting ensemble who were well served by the costume and set design staff, who created striking visual images that enhanced the poetry of the text and the music of this production.  Hamlet is so long and so well-known that it can prove daunting for performers and for audiences, but this production presented a fresh perspective to an enthusiastic crowd. 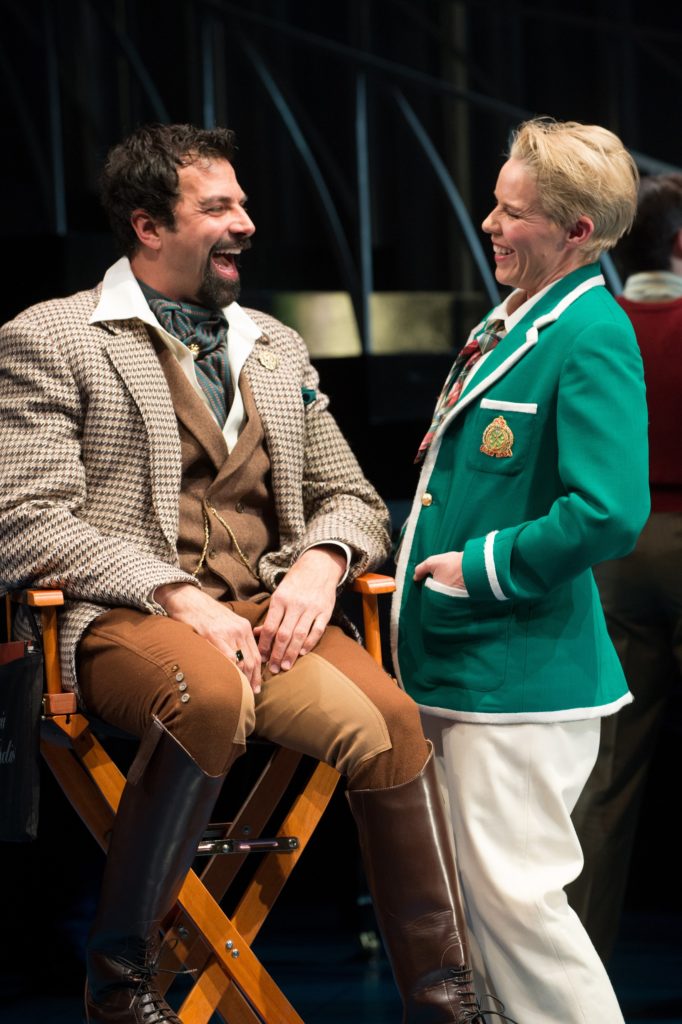 Christopher Liam Moore’s Twelfth Night started out less promisingly than Hamlet, but this equally lively performance soon won the audience over. Things were confusing when patrons entered the Angus Bowmer Theatre. They were greeted by a set that prominently featured the image of a bear.  Bears, however, are more commonly associated with The Winter’s Tale, which was also being produced this season.  Initially, moreover, the transformation of Illyria into the Hollywood of early movies was unsettling, suggesting that one might have wandered accidentally into Singing in the Rain.  The concept for the play seemed forced, at first, particularly when Orsino started speaking in a pseudo-European accent. The production invoked a number of real-life figures from this period in Hollywood, but these associations did not always seem productive.  Moore’s thematic spin on the play did not inspire confidence at the start.

However, energy and talent once again won the day.  Sara Bruner played both Viola and Sebastian, with an appealing mixture of wit, sass, and physical comedy.  Gina Daniels’ Olivia, Daniel Parker’s Toby Belch, and Kate Mulligan’s Maria also provided engaging portrayals of their characters now conceived as employees of “Illyria Studios.”  The stand-out performance, however, came from a character who is often forgotten or ignored in productions of this play; namely, Fabian.  Here, transformed into a piano player who remains on stage throughout the various shenanigans that ensue, Ron Ochs becomes a verbally silent, but perspicacious witness to all that transpires.  Continually reminding the audience that they are spectators at a show, Ochs helped ground this production.  Since the production put significant emphasis upon the importance of music in Twelfth Night, this unexpected spotlight on Fabian as piano player was a welcome surprise.

While Moore’s directorial choices in Twelfth Night sometimes raised questions, his starring performance in OSF Artistic Director Bill Rauch’s production of Richard II was magnificent.  With exciting imaginative support from Sibyl Wickersheimer as Scenic Designer and Linda Roethke as Costume Designer, Rauch and Moore partner with a strong ensemble to create a powerfully memorable Richard II. Deftly interweaving the comedy and the pathos of this history, Rauch’s production hones in on the complicated interpersonal and familial conflicts that fuel this drama.  Visually striking, the production reaches its apex when Richard’s ridiculously excessive garments cover the entire stage.  With a subsequent change in lighting, his cloak becomes the backdrop for the conversation between the Queen and the gardeners, who then “rake” the clothing turned yard waste into bags and cart it away. The production consistently features impressive performances that present a thought-provoking telling of this tale. 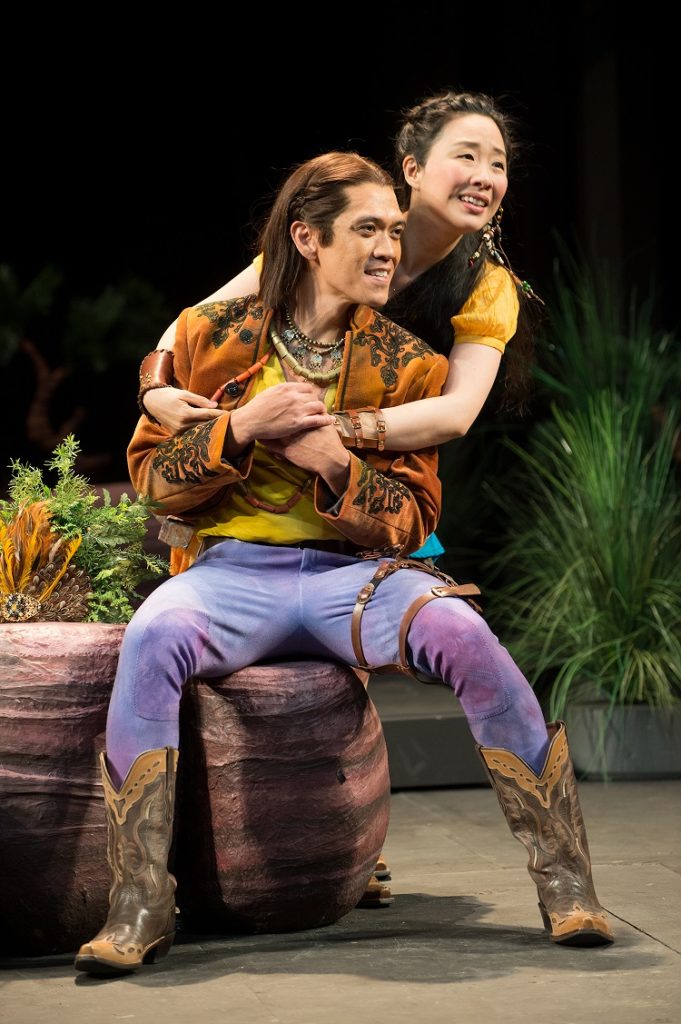 Desdemona Chang’s The Winter’s Tale is also compelling visually, at least during the Sicilian scenes, but the concept raises more questions than it answers.  The Winter’s Tale is a challenging play to present effectively.  It divides unsatisfactorily into two contradictory segments, which typically leave audiences confused about how they fit together into a coherent narrative.  The tone of the two parts vary significantly, and the disjuncture between them often defeats directorial efforts at symmetry.  Chang’s The Winter’s Tale is even more confusing than usual, however.  Her decision to set the Sicilian scenes in imperial China facilitates her admirable decision to cast the play with Asian American actors and enables costume designer Helen Q. Huang to create some remarkably beautiful apparel.  When the story relocates to Perdita’s and Florizel’s pastoral realm, however, the accompanying “hippy” motifs make no apparent sense. Obviously, there are some unrealistic chronological shifts here.  While interpolating different time periods together works well in Richard II, here, it merely adds to the many questions raised by Shakespeare’s complex romance. 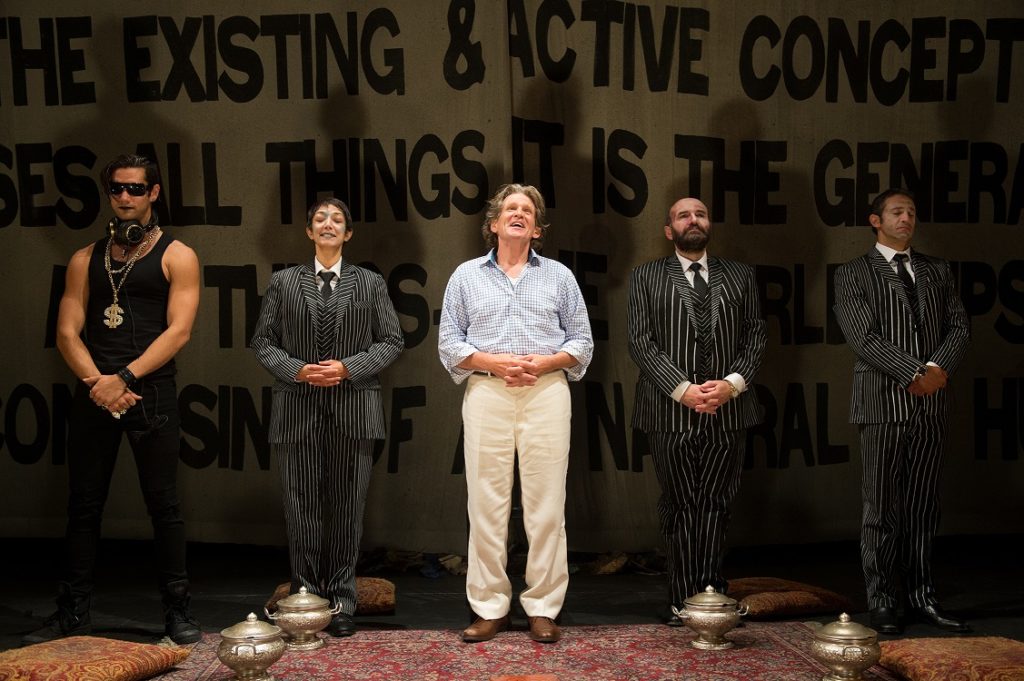 The imponderables offered through this Winter’s Tale pale in comparison to those presented in Amanda Dehnert’s Timon of Athens, however. The OSF promotional materials claim this production as a work by William Shakespeare that helps them complete their most recent undertaking of the complete Shakespearean canon, but Dehnert’s Timon is only tangentially Shakespeare’s.  In her apparent effort to make this play relevant to current events, Dehnert creates a fable of economic inequities that only occasionally corresponds to the issues raised in the play.  Timon is not an easy play to direct, although Nicholas Hytner’s stunning 2012 National Theatre Production in London (with Simon Russell Beale in the title role), indicates that the play can work well with a modern topical spin.  Ashland’s Timon fails through its efforts to be what millenials might call “relatable,” however. While there are compelling moments in the production, these are rare.  OSF audiences would be better served either by a different Timon or by a different play that could present the screed here attached unsuccessfully to Timon of Athens.

As usual, OSF’s offerings alternated between thrilling and disappointing. This remains an important arena for new and reimagined work.  Lynn Nottage’s recent Pulitzer for Sweat reflects the strength of OSF’s work at its best.  Such accomplishments more than compensate for productions, such as Timon, that miss the mark.