King Lear and The Cherry Orchard @ The Tobacco Factory, BristolTragedy

Andrew Hilton’s production of King Lear, currently at Bristol’s Tobacco Factory until March 24, is a gripping rendition of Shakespeare’s most distressing tragedy, unadorned by heavy-handed gimmicks and sensitive to the text. As usual with anyShakespeare at the Tobacco Factory production, part of its strength comes from its excellent pacing; this gives the escalating violence a sense of urgency and encourages the audience, in the final act, to feel that the play is on the verge of ending well, something that makes the appearance of Lear carrying the dead Cordelia all the more devastating. John Shrapnel’s central performance as Lear is immensely powerful, and excellent too are Kent (Simon Armstrong), the Fool (Christopher Bianchi), and Gloucester (Trevor Cooper). Also worthy of note are the wonderfully self-important and sadistic Cornwall (Byron Mondahl) and Goneril (Julia Hill), whose cold exterior is convincingly shattered by the vehemence of her father’s curses. 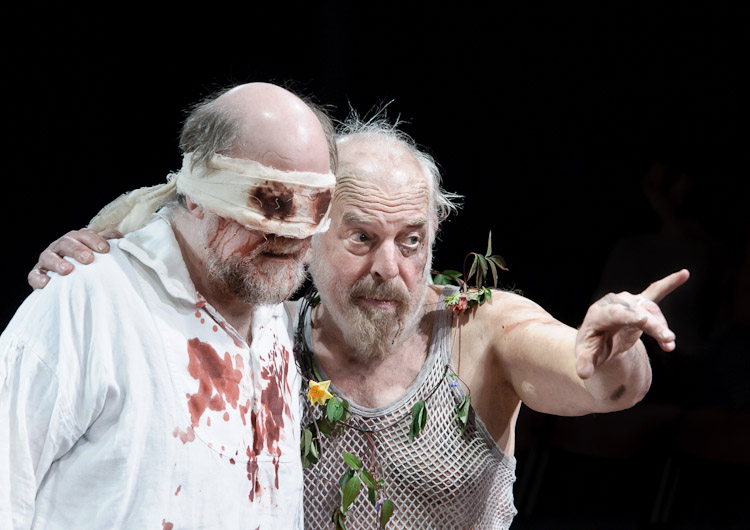 I have seen a number of productions in which Lear’s mad fury reaches a height early in the play and remains at this pitch thereafter. This can make the central scenes on the heath rather shrill and (dare I say?) dull. Shrapnel’s Lear, however, is a man who constantly endeavors to master his hurt and outrage, so that when it does break out it has the power to shock. Indeed, Shrapnel’s performance suggests that Lear’s fury is partly a response to his tears, which he despises (as the weak ‘female’ part of himself) and fights back through his furious outbursts, so that the misogyny of these rants springs somewhat from his anger at his own vulnerability. Shrapnel’s modulations in passion thus grant his performance a quiet intensity, increasing the psychological drama effectively.

Hilton’s production places an emphasis on moments of recognition. For Lear and Gloucester these moments involve a difficult readjustment of their self-image, expressing to the audience something about the nature of shame. Kent suggests that when Lear runs away, ‘burning shame / Detains him from Cordelia’. And when Lear and Cordelia are eventually reunited, there is a hint that it is shame as much as madness that makes Lear hesitant and fearful when acknowledging his daughter. It is also, perhaps, for this reason that Edgar delays telling his father who he is. He wishes not only to rescue his father from despair, but also to protect him from his love, which, in these circumstances, is as devastating as it is restorative. That individuals not only fail to recognize others, but also actively avoid the pain of recognition is brought to the fore in Hilton’s staging of Act 4 Scene 6, when Gloucester and Lear meet on the heath. When Gloucester asks ‘Dost thou know me?’, Shrapnel’s performance suggests that Lear intentionally evades the question; instead, Lear adopts the tone and gestures of the absent Fool, bitterly teasing Gloucester about his blindness and adulterous past. It is only when Gloucester breaks down weeping that Lear drops this aggressive, self-protective posture. As if beaten, Lear tells his friend simply, ‘I know thee well enough, thy name is Gloucester’. Kent may be right when he tells Cordelia, ‘To be acknowledged, madam, is [to be] o’erpaid’, but in King Lear such acknowledgments are never straightforward or pain-free. And in the end nothing can prepare Lear for his most painful recognition. Holding the dead Cordelia in his arms, he acknowledges that ‘I could have saved her’.

SATTF’s next production is Anton Chekhov’s masterpiece The Cherry Orchard. When I went to the cast’s read-through of the play, I was struck not only by how funny it is (something which often gets forgotten about Chekhov), but also how, as in King Lear, there are moments when laughter can intensify feelings of pathos. Indeed, although one might assume that King Lear and The Cherry Orchard have little in common, there are a number of interesting parallels and contrasts between the two plays which will give audiences lots to think about. Lear opens with his division of the kingdom; The Cherry Orchard centres on Madame Ranevskaya and her family’s desperate desire to keep their estate intact. Both plays feature the loss of a beloved child and the ways in which people avoid confronting painful knowledge. Both plays also feature adults who dream of returning to a childlike state, in which they retain the rights of power–but not the responsibilities. Neither of these dreams is fulfilled. Ranevskaya loses her childhood nursery partly through her own childishness, and Lear (who had hoped ‘to set my rest’ on Cordelia’s ‘kind nursery’) ends up experiencing a very different form of infantilization: namely, the humiliation, subservience, and vulnerability that comes from old age and the loss of power. Despite these weighty themes, Chekhov’s final play is also entertaining and funny. Like Shakespeare, Chekhov is wonderful at capturing the subtle and complex ways in which people interact (or indeed fail to interact), an approach that is particularly suited to the strong ensemble nature of Shakespeare at the Tobacco Factory.

Lesel Dawson is a Senior Lecturer in English Literature at Bristol University. She studied at UCLA before going on to do her M. Phil. and D. Phil. at Oxford University, specializing in sixteenth and seventeenth-century English literature. She is interested in the intersection between literature and medicine and teaches in the English Department and on the intercalated B.A. in Medical Humanities. Her book Lovesickness and Gender in Early Modern English Literature (OUP, 2008) analyzes the idea of love as a real disease in medical texts and the works of Shakespeare and his contemporaries.
View all posts by Lesel Dawson →