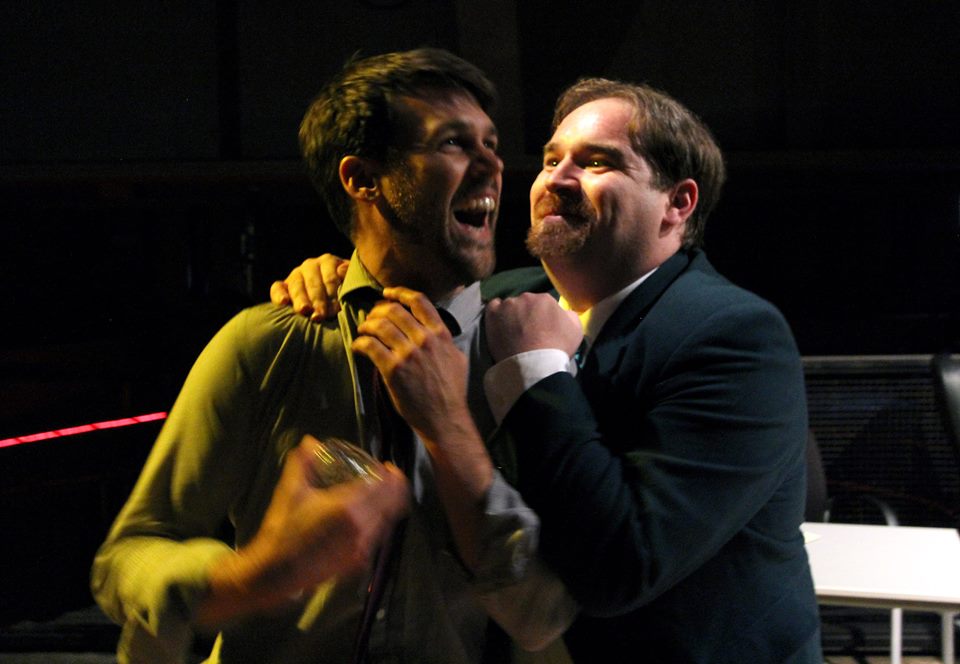 I doubt that I will ever see a better abridged version of Henry IV, Part One. I will also remember the production with fondness, as it presented me with the opportunity to hear the music of Shakira for the first time. Yes, you did just read that correctly! Thrice Ninth Productions trimmed Shakespeare’s play into a digestible 70 minute production that was overwhelmingly visceral, riotous, and hilarious in equal measures, whilst maintaining an impressive engagement with the politics at the heart of the play. The fact that the production did so with a cast of just five, was equally incredible. Stripped down to its bare bones, only five characters survived the textual massacre: King Henry IV (Michael Yale), Prince Hal (Andrew Young), Falstaff (Mike Anfield), Hotspur (Frank Teale), and Lady Percy (Lyndall Grant).

The five actors gave an incredible performance; especially Andrew Young and Frank Teale who deserve special mentions for their passion, energy, and violent outburst as young men engaging in performances of aggressive youth culture within the world of the play in an attempt to court manhood. That Shakespeare imagined Hotspur as a contemporary of Hal, rather than a man twenty-three years older, ensures that this play has much to say about youth and young men in the period. The production emphasised this by the decision to move the play out of the open fields and into the boardroom of a large corporation, where the two young men battled for ‘room at the top’. I did, initially, have my doubts as to how a play about uprising within the British Isles would transfer into the cramped environment of a boardroom complete with laptops, ipads, office furniture such as bland greyish tables and swivel chairs, box files and hole-punchers, but my fears were dissolved as the action unfolded. The men wore sharp-fitting suits with snazzy ties, well, except for Falstaff, who wore an emerald green one with characters from South Park on it – there was a distinct sense of professionalism and expertise in King Henry and Hotspur’s actions, contrasting Prince Hal’s unbuttoned shirt, loosened tie, and absent jacket. Falstaff’s attempt at professionalism amounted to ensuring that he always carried a good supply of Gordon’s Gin in his jacket pocket, and that he could watch naughty videos on the company laptop. Lady Percy also wore the attire of the 9-5 office worker; a white blouse and black pencil skirt, frequently vocalising information gleaned from her ipad and smart phone. King Henry, meanwhile, was powerful, but often resignedly melancholic, a figure at times distant from the action as the production showcased its young pretenders as men of the future. Yale’s Henry frequently looked tired, and aware that his reign as head of the corporation was coming to a close.

Falstaff and Hal’s antics ensure that they almost steal the show, often bumbling around drunkenly in the first half of the production. When Falstaff answered his mobile phone to discover that King Henry was on the line, Hal, a little worse for wear from drinking too much, hid cowering under the table and responded with a two-fingered salute when the fat knight asked whether he would speak to his father. Prince Hal, then, lorded it as a young man engaging in and performing youth culture; drinking, swearing, and mixing with other young men. The scene where Falstaff and Hal imitate Henry IV was hilarious. With Falstaff pretending to be the King, he put a computer mouse-mat on his head as his coronet, held a paper-knife as his sceptre, and dabbed beer in his eyes to make it look like he had been crying. Such comedy was eventually rejected as childish and immature by Hal as he gained prominence and masculinity in the second half of the production, occasionally shoving Falstaff away angrily as a flat rejection of his youthful self, ultimately acting with the maturity and power missing from his early indulgence in cider (in this instance) and women. It ensured that the audience subsequently laughed at, rather than with Falstaff from this moment onwards. Further moments of laughter-inducing buffoonery involved Falstaff’s attempt to cheer himself up by playing music through his mobile phone. Despite my intense loathing of ‘popular music’, Robin Thicke’s Blurred Lines seemed to be entirely appropriate for Falstaff’s attempts at merriment. The song occasioned grotesque gesticulations and gyrations from the fat knight. Is there a link between Falstaff and Blurred Lines? That’s certainly a question I will pop to Thicke on Twitter via the ‘AskThicke’ hash-tag. This wasn’t the only ‘popular’ song utilised by the production. Shakira’s song Empire was sung by Hotspur, Hal, and Lady Percy as a prelude to the forthcoming violence of battle (and yes, I had to resort to searching a popular video website to find out the title of the song).

The bare-knuckle fighting was some of the best that I have ever seen. The actors used their fists and a series of wrestling moves to brutally assault each other in fast-paced and visceral physical feats of strength. It reminded me of being fifteen years old and watching my favourite American wrestling programme, as Lady Percy, Prince Hal, Hotspur, and Falstaff smashed each other with a variety of office stationary including hole-punchers and box files, even using the railings that constitute the back wall of the Rose to crash each other’s heads into the steel frame. Prince Hal and Hotspur’s fight was particularly thrilling, with each resorting to a series of chokeholds, furious punches, and arm-breaking wrenches as they literally wrecked the set. Hotspur was finally dispatched by Hal’s violent jabbing of the paper-knife into his neck. It was chaotic, but ordered chaos, and certainly made one hold one’s breath throughout the duration of the fighting. It was ultimately a tired King Henry that collapsed into the office chair at the end of the production, but he and the rest of the cast were rewarded with generous applause for this bold, ambitious, and terrific production.

Steve Orman is an Associate Lecturer at Canterbury Christ Church University. He recently submitted his PhD on youth culture and bodily excess on the early modern stage, focusing on the Jacobean actor Nathan Field. He has written performance reviews for a number of journals. He has also published critical editions of the Gothic novels of Henry Summersett. You can follow Steve on Twitter @Steve_Orman
View all posts by Steve Orman →