Review by Will Sharpe 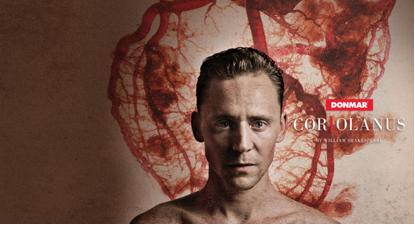 A Coriolanus that couldn’t be seen live for love nor money. I wonder why. Cramming Tom Hiddleston – subject of the molten desire of millions – into a space as small as the Donmar always meant this show would be beyond the reach of those unwilling to self-abase beyond a certain limit. If you weren’t vigilant enough to hawk for hours over the website for the tickets’ release, hardy enough to brave Covent Garden in a sleeping bag, or impulsive enough to get on eBay and do something most would regret, the NT Live screening can only have been a good thing. Of course, the screen absorbs a little of the vague and elusive quality we understand as ‘atmosphere’, though it was a communal experience nonetheless and carried – albeit from a distance – the vital charge of uncertain outcomes that live performance both demands and delivers.

It’s hard to imagine the play itself behind this mania. Beyond its relative unfamiliarity, there’s no denying Coriolanus’ arid and inhospitable climate: its siege mentality, its unflagging dialogic hostility, its almost total indifference to ordinary needs. Though perhaps unostentatious in language – compared to the alphabet soup of the late plays it immediately precedes – the energy it expends on creative, clear vituperation, on making people understand that they are either under threat, not liked, cowards, wasting their breath, going to die etc., is both remarkable and oddly stirring. There is a sort of lumpen precision at work, words making surgical cuts as they land despite being wielded like clubs, and the antagonistic verbal textures weave a grim vision of a world holding you determinedly at arm’s length. By the throat.

It may come as little surprise that Coriolanus inspires its fair share of alienating criticism to match its rabid misanthropies: this is the play of inscribed bodies, of feminising wounds, and mothers who suffocate, though it might more practically be imagined as a study of the fallout zone around one crazy man. There is so little on show that one can claim legitimately as ‘relatable’ – not that that’s a precondition for enjoying theatre – beyond what is for most of us baffled and unfocussed political grievance that it seems somehow to let us off the hook, or not let us get near it in the first place, shrinking into a cautionary tale beyond the realms of regular experience. Don’t put monomaniacs on the spot or in charge if you know what’s good for you.

The clearest challenge, then, to what seem the orthodoxies of this play is the casting of lovely, sexy, kindly Tom Hiddleston as Martius. Google ‘tom hiddleston co…’ and the search bar rushes to offer up a choice between ‘coriolanus’ and ‘cookie monster’, both, incidentally, works urging the need for self-regulation in their own ways (Alone I ate them!) One can always see the play beneath the palimpsest of production, and we must check our own sense of what constitutes textual fidelity: the play is like this, therefore the production should honour that. But who should play Coriolanus? Ray Winstone? Godfrey Bloom? Roy Keane? 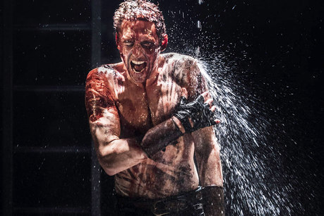 Director Josie Rourke shrugged evasively at Emma Freud’s suggestion that having ‘the sexiest man in the world’ in the lead role couldn’t hurt the production’s chances. She did, however, maximise the opportunity throughout the show to combine Hiddleston’s daring and commitment as an actor with other attributes he happens to possess. As a man faced with the image of a much more attractive, half-naked man’s muscular body spasming beneath the shock of a gelid shower, I felt an almost psychic duty to read the image exclusively as one of lonely, puritanical suffering, torture and humiliation, the frailties of human flesh, hoping everyone else would do the same, though there is little doubt the production was cashing in its chips among other (gasping and giggling) sections of the audience demographic at this point. And good luck to it too.

Yet Hiddleston’s performance deserves a wider focus than a narrow debate about whether or not he is too sexy, or hard enough, for the part. He seemed to draw his feelings from a more complex wellspring than the usual austere broth of atavism and anger, and thus was able to convey different states of being at the same time. It was a sustained and intelligent drive at nuance, and the constant knowing reminders from both actor and production that this was, lest we forget, a theatrical essay, somehow comfortably divested the show of the wearisome burden to convey these impulses naturalistically. Thus pressure was relieved, and room made for a reading both heartfelt and critical, an imaginative grasp beyond the apparent purview of the character’s hard-boiled factory settings towards emotions it is not clear he possesses. All this was particularly evident in the ‘I banish you’ sequence, the return to Corioles, and of course ‘O mother, mother! What have you done?’, in which the Teflon lacquer of antipathies was many times scoured off by tears that betrayed real wounding, albeit our willingness to invest was probably made stronger by the sympathies pretty people traditionally inspire. 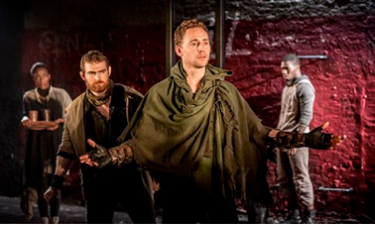 For those of us without such exterior capital, Mark Gatiss’ Menenius was a welcome point of contact, perhaps embodying best of all the production’s larger intent to strip away spleen and cerebral control and be smart from the heart. He was notably perceptive and articulate in the pre-show preamble, and as soon as he broke up the tawdry opening rabble-rousing by launching into the body parable with an unusually refined marriage of sanguine comedy, emotional directives that felt honest, and skilful political manage that felt more necessary evil than manipulative game, it was clear that his alert sincerity was to be the vital organ through which much of the production’s bile was purified. He conveyed a clear understanding that matters of policy are no more abstract than the maintenance of personal ties if people are on the other side, and was both barometer and lightning rod for the cumulative shocks of each breakdown in relations. 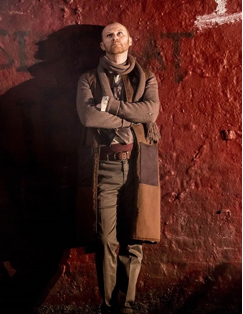 Other honourable mentions go to Elliot Levey and Helen Schlesinger as a pair of wonderfully sleazy, corrupt and mutually-obsessed tribunes; Peter De Jersey as a noble and careworn Cominius; Hadley Fraser was a bullish Aufidius, while Deborah Findlay’s Volumnia captured very well the double-back hypocrisy of a matriarch who spends an entire play damning cowards who beg for life on their knees, only to end it doing exactly that. Birgitte Hjort Sørensen, whom we learn was brought in to reprise some of the crusading strength she showed as news anchor Katrine Fonsmark in Borgen (described by Mark in Peep Show as ‘like The Killing but with more bureaucracy’), played Virgilia. Yet as the role seems ultimately to afford little beyond fretting, crying, kneeling and proffering a knock-kneed boy to an unhinged father, like Shelley Duvall in The Shining, the parallels went somewhat unfulfilled, despite the skill and feeling underpinning her performance. Continuing the focus on overt theatricality, it was nice also to see a thoughtful redistribution of all small parts among a three-strong ensemble (Rochenda Sandall, Mark Stanley and Dwayne Walcott).

The pared-back austerity and claustrophobia of the Donmar space was a good holding cell for the play’s intensities. This Rome is not, as the pre-show interviews remind us, the mighty empire of the Caesars. It is a walled city, fearful of assault, in a land of walled cities, fearful of assault. And, as long as there are guys like Martius, they should be. Outside the walls are hinterlands best not crossed, lest they lead you, sooner or later, to your enemy’s gates, which here seem to be somewhere near Scarborough (the Volsces all put on their best Geoffrey Boycott to signal that we were not in London – I mean Rome – anymore). The first raid on Corioles played like an extended advert for Tom Hiddleston’s bum, postured and backlit atop chairs like David Copperfield in a messianic 1990s Vegas magic show, though despite what Rourke might have envisaged it felt overall quite a spare, or perhaps uncluttered, production, with no real movement work beyond a lengthy, naturalistic piece of fight choreography when Martius and Aufidius face off in Act 1. Design features gradually fell away, though vague political slogans were sprayed onto the walls throughout and a red square was painted on the stage to convey – what? The walls tightening? A combat arena? Moscow? – the potentially interesting but by no means clear symbolism to which geometric shapes drawn on stages usually amount. 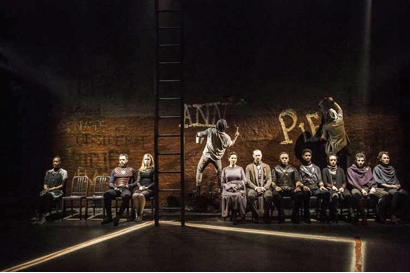 All the chair work around a mostly ever-present onstage cast felt very Cheek by Jowl, who in turn feel very Brecht. My eyes caught the drain installed around the stage early on which made me wonder whether things might get a bit German, if you will, in the impulse to heighten fraught psychological and political states by covering the stage in water and dirt.  It didn’t disappoint, though being English we couldn’t possibly let it stay there, so actors in the moment and stagehands in the interval hovered with mops and brooms to clear it all up as soon as it landed. Naturally, wet floors in the workplace are a clear health and safety issue, but the gesture nonetheless greatly undermined the attempted devil-may-care-ness of it all, especially as I was revisiting in my mind’s eye – as I often do – the extraordinary devastation in which The Berliner Ensemble left the RSC’s Courtyard stage after each performance of their Richard II in 2006.

The grand opera of Hiddleston’s death scene could not but recall the image, so familiar from Coriolanus stage histories, of Olivier dangling by his ankles, though from all accounts that mirrored the performance entire in being done at white heat, the actor’s tyrannical control allowed free rein to the last. It was a headlong dive at glorious self-annihilation, the actor as classical hero in the mould exalted by Tynan, martyring body and soul in a daredevil and genuinely high-risk climax intended to cement stage immortality. Hiddleston’s grand exit was, unfairly I felt, robbed somewhat of agency and momentum by the fiddly fastenings that sought quite literally to shackle him into an idea and serve him up, finally, as directorial motif. Awkward mechanics were given further precedence as Fraser’s bare bodkin popped the large blood bag under the hanging Hiddleston’s breastplate so that the earlier shower sequence might be unsubtly relived. Okay, it’s a strong image, but a counterintuitive one in that it cut off the final peroration of betrayal, grief, defiance, or anything else Hiddleston’s face, had we seen it, might have chosen to convey.

But this was a fine production, perhaps overshadowed in that respect by the oddity of the cultural phenomenon it became. Tidal waves of adoration, goodwill and near-Beatlemania crashed upon a caustic and mean-spirited play, staged in the darkest depths of a London winter in an old banana-packing factory. Well, a cinema really. Like Martius himself, this production in its original setting was, unlike the performance, impossible to get close to.

Will Sharpe is one of the General Editors of Collaborative Plays by Shakespeare and Others (RSC/Palgrave, 2013), as well as a Chief Associate Editor of the RSC Shakespeare individual volumes series, for which he co-edited Cymbeline with Jonathan Bate. He is one of the General Editors of Digital Renaissance Editions, and has taught at the University of Warwick, Nottingham Trent University and The Shakespeare Institute, University of Birmingham, where he is Visiting Lecturer.
View all posts by Will Sharpe →