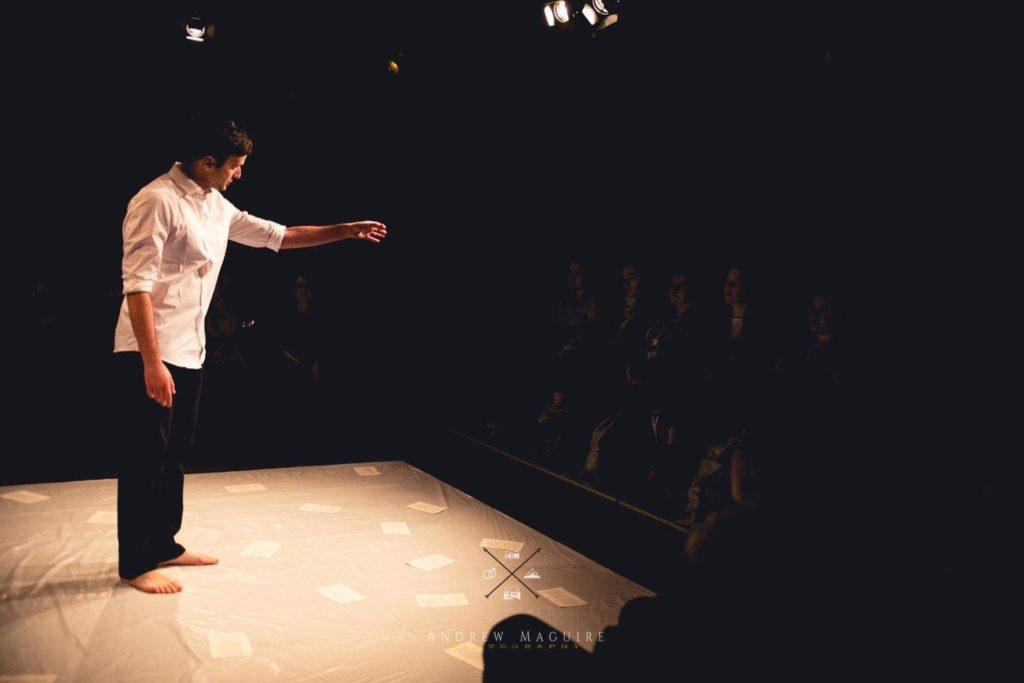 Having been fascinated by Tim Crouch’s previous plays inspired by Shakespeare’s lesser characters (I, Malvolio and I, Cinna (the poet),) I looked forward with eager anticipation to this perspective on Macbeth.  I was certainly not disappointed.

Entering the small upper-level space that comprises Stratford’s Attic Theatre, the audience was presented with the sight of a barefoot young man, dressed simply in white shirt and black trousers who slowly paced a flat, thrust stage covered in white plastic sheeting upon which were scattered pages of the Shakespeare play which acts as this base text for I, Banquo.  A simple back wall was similarly adorned; a permanent reminder of the backstory of both this production’s narrative and of the friendship that underscores Crouch’s adaptation.  The set comprised merely a battered wooden chair painted white and a deep bucket filled with blood, calling to mind the witches’ cauldron of the original work.

Like Henry V’s Chorus, Banquo (Simão Vaz) opened the play by calling upon his audience’s ‘imaginary forces’.  Drawn into his memories, we were asked to become, simultaneously, both auditors to his narrative of a friendship hideously concluded and Macbeth, the friend driven to bring about that end.  Banquo’s early memories suggested a possible explanation for such a breach, recalling that ‘We were friends when my son, Fleance, was born.  We were friends when your child died so young.’  It is these two unseen children, one dead one living, that haunted the play, becoming the focus for toxic dynastic ambition.  Banquo also recalled that theirs was a bond formed in the horror of battle.  He dipped one hand into the bucket of blood, allowing it to drip onto the stage and spatter across the back wall as he reflected both on the lives that had each taken, and the occasions on which each had saved the other’s life.  Throughout such reminiscences, however, Banquo’s repeated refrain is that ‘It could have been me’, honoured by King Duncan for bravery and promised a kingdom by the weird sisters, before, seemingly casually, concluding that there are ‘no hard feelings.’  The thwarted ambition underlying this seeming acceptance, alongside that of Macbeth and, with more than a touch of misogyny, a strong emphasis on Lady Macbeth’s malign influence, becomes another major thematic element. Reaching once more into the blood, Banquo mused that he should have trusted the instinct warning him of the danger of trusting a friend who, although ‘full of the milk of human kindness’ had been irrevocably altered by the prophecy: that Macbeth’s ambition, reinforced by an ‘unsexed’ wife who feared her husband’s weakness, would eventually over-ride friendship, nature, and, ultimately, humanity itself.

Describing the arrival of the royal party at Macbeth’s castle, Vaz’s Banquo again called upon us to imagine his own sleepless night, the night on which a king was killed, berating himself for not having known what was to be done.  He recounted how he and Fleance had met Macbeth on the battlements and chatted about the weather with a friend even then on his way to Duncan’s chamber.  Bathing an entire forearm with blood, he demanded the audience reflect on the differences between killing in the heat of battle and a cold-blooded and ‘unnatural’ regicide that would lead to hell and damnation.  ‘I should have known!’ he cried.   Splashing the back wall with yet more blood, he recounted Macduff’s horrified description of the discovery of Duncan’s body as ‘all hell breaks loose.’   Hearing of the death of Duncan’s grooms at Macbeth’s hands, he questioned his  too trusting nature, ‘Why don’t I see the performance?  Why don’t I run – take Fleance and run.’

Instead, as the musical underscoring provided by an offstage guitarist becomes darker and more threatening, Banquo described how he and Fleance had set out for a ride, returning through the thickening night to be waylaid by murderers under orders from his erstwhile friend.  Splashing yet more blood over himself and the back wall, he consoled himself that ‘Fleance escapes.  My children shall be kings,’ reinforcing once more the key difference between his own situation and that of the childless Macbeths. Indeed, Banquo’s decision to haunt the new crowned king at the celebratory (offstage) banquet was driven by his anguished realisation that ‘My son is fatherless.’

Time shifted and became unstable as Banquo’s ghost, an omnipresent, omnipotent narrator, recalled the slaughter of Macduff’s family, and how Macbeth’s realisation that his bloody deeds would benefit only Banquo’s heirs drove him to conjure the weird sisters, demanding reassurance. The bloody bucket became a cauldron from which bloody shapes are drawn and tossed against the back wall as Macbeth was warned to ‘Beware Macduff’ and yet encouraged to be ‘bloody, bold and resolute’ with the reassurance that he would remain unvanquished until ‘Birnam Wood to high Dunsinane hill / shall come against you.’  The final prediction that Banquo would father a line of many kings was illustrated by the drawing from the bucket of what appeared to be a string of bloodied umbilical cords.

As with Shakespeare’s original, the play then hastened towards its bloody conclusion.  Banquo recounted the self-destruction of Lady Macbeth, whose ‘nights are plagued with sleep-walked re-enactments’ of Duncan’s murder and how Macbeth has finally ‘supped full of horrors.’  Grateful now that he was not the Sisters’ chosen one, as Birnam Wood approached Dunsinane Banquo remarked that ‘we’re evens now again.  Mates’ except, of course, that ‘Fleance is alive.’  As Macbeth’s brief candle was blown out, he withdrew a severed head from the cauldron, and the themes of this adaptation, imagination, corrosive dynastic ambition, and the destruction of friendship, were encapsulated in the pronouncement that ‘my son’s future is secured.’  The only disappointment for me was that these themes were not emphasised in Crouch’s text by the inclusion of the initial impetus that first prompted Macbeth’s murderous ambition, Duncan’s decision to create his own dynasty by naming his son, Malcolm, as his heir.

Walking home I constantly considered the ‘What ifs’ raised in the text.  Had the sisters’ prophesied that Banquo would be king, leaving Macbeth with the hope that, despite his current childlessness, he would father a line of kings, would their friendship have ended just a bloodily?  If so, who would first have turned on whom?  Banquo to protect Fleance’s inheritance, or Macbeth driven by ambition for his as yet unborn offspring?  This was a thought-provoking monologue, brought to life by an excellent young actor.  I look forward to further productions from the SE company.