Reviewed by Elizabeth Sharrett (The Shakespeare Institute, University of Birmingham) 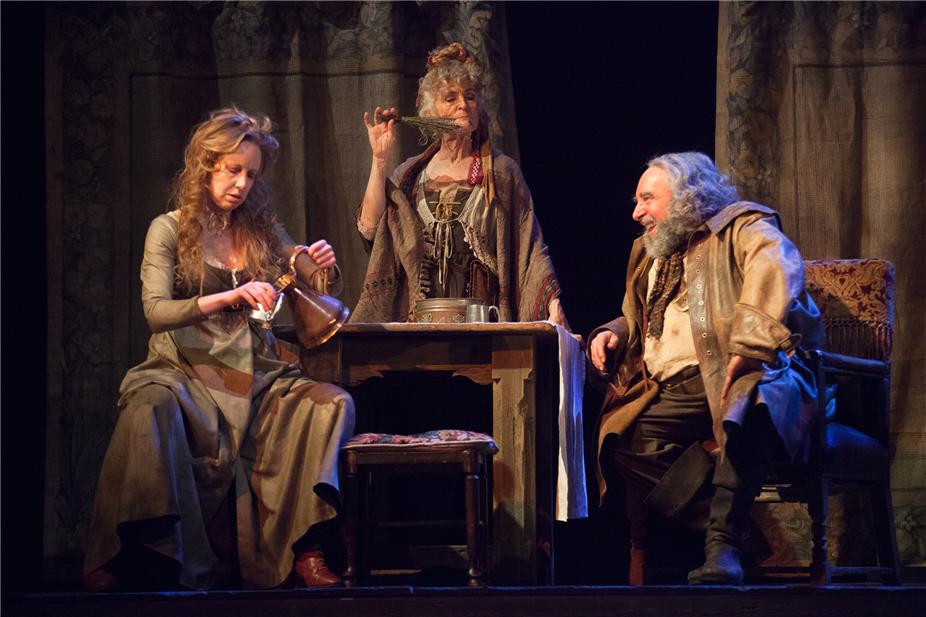 The third instalment of Greg Doran’s Henriad began with a departure from the “doublet and hose” aesthetic of the two previous productions, and for a moment I thought we were in for a very different show. After a polite reminder to “switch off mobile phones”, the audience were invited by the same voice to “Open your ears”, at which point Rumour (Antony Byrne), walked on stage wearing a Rolling Stones t-shirt, repeating the command, “Open your ears”. Projections of #Rumour and #OpenYourEars appeared on the back wall. A phone sounded and Rumour gave a guilty shrug. Abandoning his attempt to divorce us from our hashtag world, he appeared to delight the front row by taking a selfie with them, recalling Ellen’s famous photo at the Oscars earlier this year. Upon concluding his speech he donned a wool cap and morphed into the Porter, stepping back into the world of Doran’s “ye olde England”.

The programme explored the meaning of rumour in the digital age, and, indeed, the opening vignette invited us to consider how it works in today’s world. But with the exception of a rather buried connection between Byrne’s Rolling Stones t-shirt and his Keith Richard’s-esque Bardolph, which was actually more of a Jack Sparrow imitation, the production never again referenced the aesthetics of this sketch. Other than reminding us that news travelled slower in “Shakespeare’s day”, the interlude seemed incongruous within the wider cycle of productions, and, as a result, came off as a bit of a gimmicky way of putting the past into conversation with the present. It did make me wonder, however, whether we’ll see a connection between Rumour and the Chorus when Henry V is eventually performed.

This puzzling beginning aside, I enjoyed the production overall. Antony Sher’s diseased Falstaff was as humorous as he was unsettling – a convincing interpretation in my opinion. He moved with pain as he cursed his gout stricken body, and the warmth of his voice and his slurred speech lulled us into his confidence, producing much laughter as he pursued his schemes. For instance, after the bumbling but endearing Justices Shallow (Oliver Ford Davies) and Silent (Jim Hooper) greeted “good Sir John” there was an awkward pause in the dialogue, eventually filled by Falstaff’s manipulative observation that “this is hot weather, gentlemen” while looking directly at a pitcher of refreshment. After another pause, Shallow finally realized the implications of his friend’s comment, apologetically offering him a drink before they all sat down to scrutinize the “half a dozen sufficient men”. It was moments like this where Sher’s calculating Falstaff was at his funniest. But it was also where he was at his most heartless – the portly man lounging, drinking, and laughing as his pathetic conscripts, one struggling to stand, looked on.

This production beautifully fleshed out a number of bit parts that highlighted the suffering of this sick kingdom, such as the tender, yet troubling, moments shared between Wart and Feeble. Wart, played by Leigh Quinn as a severely hunchbacked old man who walked with difficulty, and Feeble (Nicholas Gerard-Martin), who seemed to be the caretaker of his unsteady friend, exchanged worried glances at the elder’s dismissal as unfit to fight. Feeble’s timid protest that he “would Wart might have gone, sir”, left me wondering what the old man’s future would be without the help of his younger friend.

Paola Dionisotti’s Mistress Quickly was also particularly poignant. Her tiny frame was dwarfed by almost everyone on stage, making her indignation at the wrongs done her all the more humorous as she swung punches at men twice her size. These physical features, however also served as reminders that this woman, no matter her efforts, was at the mercy of her patriarchal world. Indeed, while lambasting Falstaff for the money and the marriage he owed her, she appeared exhausted and exasperated by a life of exploitation.

The guilt of Jasper Britton’s King Henry in Part 1 had clearly taken a toll on the tormented man by the time we meet him in this play. Draped in what we learned was a large map of England, the sleep deprived king walked into the space of the Eastcheap tavern lamenting, “How many thousand of my poorest subjects/ Are at this hour asleep”. As he spoke, pressed by the weight of his kingdom, he stood ghost-like between a snoring Mistress Quickly, and the Page (Luca Saraceni-Gunner) fast asleep on a heap of pillows.

This play, as well as the entire tetralogy, hinges upon the reconciliation of Henry and Hal at the King’s deathbed, and Britton and Alex Hassell beautifully captured the raw emotion of the scene. As they thrashed through their family baggage Henry accused Hal of wishing him dead, while roughly pressing the crown on his son’s head, screaming, “For now a time is come to mock at form –/ Harry the Fifth is crowned! Up, vanity!/ Down, royal state!”. The King then ripped the prop off, throwing it centre stage, leaving the two men sat at the foot of the bed to sort out their relationship as father and son, apart from the crown. Only moments before we had seen Hal accept his destiny, almost in a state of shock, but with resolution, when he thought his father gone. Now the man, who momentarily thought himself King, knelt before his father with boyish fear, his voice cracking as he confessed his resentment towards the crown for the torment it had caused his father. When Hal finally appeared as King dressed in crisp robes, the light was bright and clean and the orderly procession gave a sense that the kingdom’s health had been restored. Thus, the rejection of Sher’s hobbling Falstaff became the final purge of decay and disease that had plagued Henry IV’s reign. Once on the throne, the new king was solemn but thoughtful, and while eager to put his court at ease, he seemed nervous about his ability to rule. I’m looking forward to seeing what Hassell does with Henry in the next instalment.

Perhaps the most intriguing moment of the production came at the very end, just before the stage went black. Falstaff’s Page ran centre stage and stood in the spotlight. Although adorable, the boy appeared unsure and vulnerable as he faced the vom down which the rejected Eastcheap crew had just limped. It got me thinking, was this just a cute way to end a quaint production, or was it darker, a foreshadowing of the massacre of the boys in Henry V? The production has taken a break from its summer run, but will return in December later this year.

Elizabeth Sharrett teaches at the University of Birmingham and Newman University. She recently completed a PhD on the cultural meaning of beds in early modern England and their use as stage properties in Renaissance Drama at The Shakespeare Institute, and has publications forthcoming on the subject. She is a co-founder and contributor to the blog Shakespeare's World in 100 Objects (https://findingshakespeare.co.uk/category/shakespeares-100). You can follow Elizabeth on Twitter @egshar
View all posts by Elizabeth Sharrett →