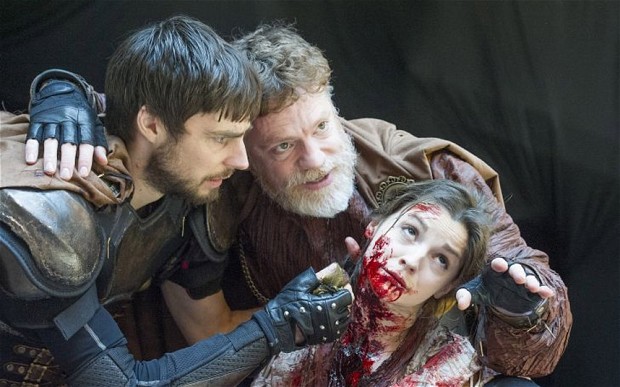 Being somewhat squeamish when it comes to violence, particularly of the bloody kind, I had a feeling that Lucy Bailey’s Titus Andronicus, a revival of her popular 2006 production, would be something that I would have to endure rather than enjoy. Coupled to the fact that numerous national newspapers and international news websites had featured short articles on the fact that handfuls of audience members had fainted during the butchery, gave me great confidence that I too, would add to the statistics. Thankfully, I didn’t, but at least two groundlings did, and it’s probably unsurprising that it is the bloody violence that I wish to focus on in this review.

The sense of menace was apparent as soon as I entered the yard. The colour black dominates the stage, as hangings completely cover the tiring house, balcony, and pillars, and ominous smoke billows out from the stage, creating an atmosphere that sets one on edge immediately.  To add to the tension, offstage, an axe can be heard being sharpened. Positioned in the yard, were two large black metal structures with platforms for actors to stand upon, and these were freely wheeled around – sometimes at an alarmingly fast-pace – throughout the three hours of psychosomatic torture. In fact, I can strongly say that during my years of attending the Globe as a groundling, Titus featured the most interaction – indeed, invasion – of the boundaries between stage and audience participation. Whether it was via the constant movement of the large wheeled platforms; the speed and brutality with which characters manhandled victims or captives out of the arena; audience members were scattered with astonishing force. I don’t think that it’s too strong to suggest that audience members in the yard were bullied in this production, which aptly reflected the visceral culture of Roman society led by the tyrant Saturninus (Matthew Needham). Initially, some audience members were somewhat slow to get out of the way of the large wheeled structures, something which I feared, at first, could be a problem in the production, but as the violence increased, so did the speed of the actors moving these platforms around the yard. If audience members were a bit slow at getting out of the way, they were greeted with several loud threats of “MOVE!! MOVE!! MOOOOVE!” by the actors. My fellow groundlings and I soon learnt to get out of the way quickly once those structures started moving. The same can be said when actors left the stage through the yard. The audience were very anxious to get out of the way quickly – often emitting uneasy laughter or genuinely looking afraid in case they got in the way. At one unlucky moment when the captured and bound Aaron was dragged out by the Goths, the speed of the exit caused audience members to scatter, leaving the actors rushing straight at me. I couldn’t help but leap out of the way; it seemed the natural reaction, and I think there was every possibility that I would have been bundled over had I not moved. In this instance, Bailey’s bellicose production maintained a constant level of violence throughout the entire production; stage and audience were united in witnessing and becoming a part of such violence.

Perhaps at times the wheeled structures were overused, and I got the sense by the end of the play that some audience members in the yard were positively frightened of being near the structures for fear of getting in the way, and as soon as the actors started wheeling them around, audience members moved as far away as possible. This may have resulted in infrequent periods of detachment from what was happening on stage for those audience members, but I think in fairness this is perhaps a rather harsh criticism. My own ability to be in the way at every moment when the stage action spilled over into the yard resulted in my baseball-cap being yanked off my head by an over-excited Roman during the brutal murder of Bacchus (David Shaw-Parker). The Roman donned the baseball-cap, danced around onstage with his fellow men, before returning to the yard to plonk the cap back on my head. There were several moments where laughter was elicited from the audience, in fact, the audience positively roared when Aaron (Obi Abili) took great pleasure in informing Chiron (Brian Martin), ‘Villain, I have done thy mother’ (4.2.78). The bird seller (Steffan Donnelly) also occasioned much laughter with two pigeons hanging from string tied to a wooden cane mounted on his shoulders frequently whacking into people standing in the yard. However, when Demetrius (Samuel Edward-Cook) brutally snapped his neck, the horrible cracking noise was met with several shocked gasps from the audience.

Strangely enough, I felt that there wasn’t that much blood in this production, at least compared to the production by the RSC in 2013, directed by Michael Fentiman. However, the nature of the violence was difficult to watch, despite the fact that this wasn’t a gore fest. Titus (William Houston), who was evidently an emotional wreck from the very beginning of the production, kept his back to the audience as he cut off his hand. The severed hand, picked up by Aaron, spurted forth blood. Lavinia’s (Flora Spencer-Longhurst) rape and mutilation, it goes without saying, was also incredibly difficult to watch. Covered in blood and permanently shaking, blood trickled down her mouth as she tried to respond to Marcus’ (Ian Gelder) questioning. The muted screams of Chiron and Demetrius were agonising as Titus cut their throats and blood trickled down into the bowl held by Lavinia. Other deaths, such as Titus’ stabbing of his own son Mutius (Jamie Wilkes) simply required the audience to imagine the blood spilt in the act of stabbing, the effect of which suggests that the audience were arguably more shocked by the fact that Titus has slaughtered one of his own sons, than they would be by blood gushing out of Mutius’ wound. Personally, I found the death of the Nurse (Bryonie Pritchard) perhaps the most unsettling onstage death. Aaron head-butted her, and she fell down on all fours, facing the audience. With his sword, Aaron lifted her skirt and with appalling sexual-violence killed her. Blood spurted from the Nurse’s mouth, and it was at this point that several groundlings physically turned away to avert their sight, unable to watch this atrocious moment. As Aaron withdrew his sword, it was covered in blood.

Despite the fact that audience laughed to see Titus attired like a chef in the final scene, the laughter was swiftly suppressed as Tamora (Indira Varma) was sick after learning of the pie-filling. It was telling of how corrupt Saturninus and Tamora really were by the fact that they did nothing to stop Titus from suffocating Lavinia; both met their ends with Titus stabbing Tamora in the back of her head and Lucius (Dyfan Dwyfor) ripping out Sarturninus’ throat with his teeth (which also occasioned more squeals of disgust and shock from the audience).

It always feels strange watching Titus Andronicus; I’ve always left theatres with a completely different set of feelings compared to those that I typically experience after watching any other play by Shakespeare. Usually I have a strong sense of enjoyment, but with Bailey’s Titus, I felt that my feelings were actually aptly recorded by Bailey herself in the programme notes. The play is “overwhelming” and it certainly drains you physically and emotionally.

Steve Orman is an Associate Lecturer at Canterbury Christ Church University. He recently submitted his PhD on youth culture and bodily excess on the early modern stage, focusing on the Jacobean actor Nathan Field. He has written performance reviews for a number of journals. He has also published critical editions of the Gothic novels of Henry Summersett. You can follow Steve on Twitter @Steve_Orman
View all posts by Steve Orman →