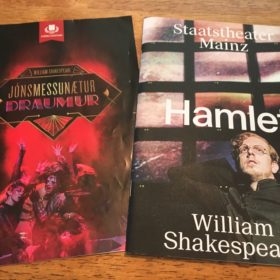 Hamlet directed by K.D. Schmidt for the Mainz State Theatre, Mainz, Germany. March 13, 2019 And A Midsummer Night’s Dream directed by Hilmar Jónsson for the National Theatre of Iceland, Reykjavík, Iceland. March 16, 2019. Reviewed by Justin B. Hopkins I went on holiday to Germany, with a long layover in Iceland on the way […]