For the Globe’s production of Hamlet, Michelle Terry, in the title role, delivered a focused, sober-minded performance. The character’s ‘antic disposition’ (1.5.192),[1] physically depicted through the clever make-up (Pam Humpage) and costume (Megan Cassidy) of a clown’s intentionally feigned madness, highlighted Hamlet’s own deception against the background of deception plots that permeate the play. Hamlet, though delayed by indecision and inaction, did not actually drift into the madness that he presented, but progressed resolutely towards revenge. Passionate, emotional, and energetic – but never slap-dash or haphazard – Terry’s Hamlet invited audience members to accompany the character on a thoughtful journey that explored the poignant implications of familial ties, the limits of friendship, and the betrayals of trust.

The familial ties were first presented through the emotional encounter between Colin Hurley’s Ghost of Old Hamlet and Terry’s Hamlet; the direction privileged the father-son connection over the king-heir relationship and the charge of a vengeful, restless spirit. This season’s Globe productions eschewed prescribed blocking, favouring organic movement that allowed for a variety of stagings, which this reviewer witnessed in two (rather different) performances. Yet, in both performances, a consistent emphasis upon physical touch as the Ghost and Hamlet embraced bridged the tangible and the intangible, powerfully embodying Hamlet’s sense of loss and the inevitable separation between the quick and the dead at the cock crow. The intimacy of familial relationships was perhaps most apparent later in Gertrude’s bedchamber after Polonius’s death, when Old Hamlet’s Ghost returned to stay Hamlet’s rage against Gertrude (Helen Schlesinger). Approaching from behind, the Ghost embraced Hamlet as a father soothing a child. Mirroring the Ghost’s attempts for connection, Gertrude crawled towards Hamlet from the front, hesitant in the face of his violent outbursts but also feelingly seeking to comfort her son. The moment all three connected through an embrace visually reinforced the play’s often-overlooked emphasis upon the family unit of Old Hamlet, Gertrude, and Hamlet, which strongly contrasted with Hamlet’s conflict surrounding the marriage of Claudius (James Garnon) and Gertrude. Kneeling between Gertrude and Old Hamlet, Terry’s portrayal of an overwhelming sense of relief at being reunited as a family provided one of the most enduring visual moments of the production.

The familial ties between the overbearing Polonius (Richard Katz) and his children Laertes (Bettrys Jones) and Ophelia (Shubham Saraf) also explored some of the psychological implications of family bonds. Katz’s Polonius manipulated Ophelia through demeaning subjugation, instructing her to bait Hamlet just before the ‘To be, or not to be’ speech. However, somewhat confusingly, Ophelia immediately followed her father out as Hamlet entered to deliver the monologue – despite the fact that no text of Hamlet indicates an exit for Ophelia at that juncture. For the famed monologue, Terry’s choice to deliver the speech as a conversation with the audience, sitting upon the stage’s edge and interacting with the groundlings, lacked the gravity of a suicidal mind. Rather, her delivery directed the hearer towards a reflection upon the consequences of words and actions, especially with an ear towards deception: ‘Th’ oppressor’s wrong, the proud man’s contumely, / The pangs of despised love, the law’s delay’ (3.1.79-80).

Strain upon the familial tie was most evident in the touching and raw reactions of Jones’ Laertes when Saraf’s Ophelia went mad following their father’s death. Jones and Saraf performed beautifully opposite one another, conveying deep sibling love – and, at times, the playful relationship of brother and sister – but the bond was most pronounced in Laertes’ tortured reactions as Ophelia oscillated between physically beating herself and delicately dispensing flowers – including to an audience member with the line, ‘There’s a daisy. I would give you some violets, but they withered all when my father died’ (4.5.207-09). Ophelia echoed Hamlet’s grief at the loss of a father but also countered Hamlet’s antic disposition with a display of true madness. Saraf’s Ophelia was strong and vulnerable, often leading the emotional charge of the scene and eliciting powerful responses from the cast.

Relationships continued to deteriorate, especially the friendship between Hamlet and his schoolfellows Rosencrantz (Pearce Quigley) and Guildenstern (Nadia Nadarajah). The brilliant incorporation of British Sign Language (BSL) into the play by these three characters revealed moments of intimacy and shared inside jokes, which made the falling out even more obvious when Hamlet refused to sign to Guildenstern or speak to Rosencrantz, effectively severing communication and trust. Contrastingly, the honest friendship of Horatio (Catrin Aaron) and Hamlet served as a foil to the deception that poisoned most of the play’s relationships. Aaron played Horatio aptly as the stalwart companion, trusting and willing to listen. Hamlet and Horatio’s final moment drew together the production’s emphasis on relationships, contrasting the bonds of family and friends – both incredibly powerful – to the devastation of broken trust. 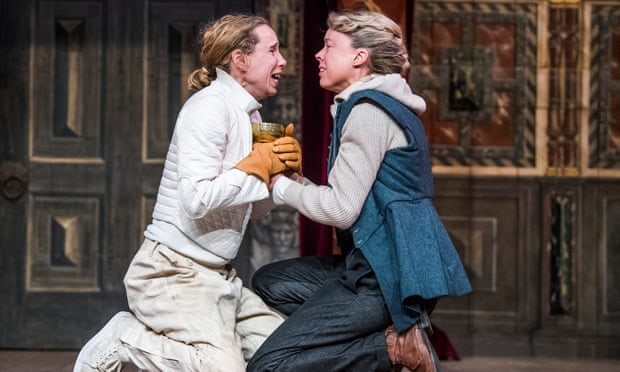 Hamlet’s (Michelle Terry) and Horatio’s (Catrin Aaron) emotional farewell after Hamlet is poisoned.
Photo by Tristram Kenton for The Guardian

This production also clearly favoured different aspects of seeing and hearing – as opposed to merely looking and listening – throughout the play, but the most distinctive example occurred during the dumb show and play of The Mousetrap. For the dumb show, the production’s musicians (Adrian Woodward, Louise Anna Duggan, Hilary Belsey, Stephanie Dyer, and Adam Crighton) performed a screaming jazz number (music composed by James Maloney) to accompany the action of poisoning the Player King (Colin Hurley, who appropriately doubled Old Hamlet’s Ghost). The ensemble wailed just as Player Queen (Tanika Yearwood) emitted a voiceless scream at discovering the murder. However, no words were spoken or action depicted on stage to represent Hamlet’s added lines to the players’ performance, allowing for the reactions of Claudius and Gertrude, seated, to be clearly studied by the audience with the same intensity as Hamlet’s stare. The succeeding play within the play was represented solely through a percussionist who played at various points behind the audience, creating an unsettling stereophonic experience that made effective use of the Globe’s encircling space.

Regarding the use of the Globe’s stage, the company chose to keep options of movement and delivery open, depending upon the needs of the moment. These options allowed for diverse and unique performances, no two of which were exactly the same. In the production’s programme, Jack Laskey (Fransisco, Player, and Fortinbras) reported on the ways the cast chose ‘not to settle on ways of delivering [their] text but to keep on exploring what these words mean’. Similarly, Schlesinger’s note on Gertrude expressed how she wished ‘Gertrude was a better mother’ but also how ‘Gertrude would like to be a better mother’, a sentiment that Schlesinger effectively conveyed with hesitations, regret, and eventual acceptance as she received the poisoned cup. The diversity of performances paired well with the diversity of the cast, yet the occasional inconsistencies of responses and actions did result in minor distractions. Overall, the flexibility of this approach seemed to allow for a Hamlet that embraced the unpredictability of relationships and set a high standard for future productions during Terry’s tenure as Artistic Director of the Globe.

This review incorporates ideas and observations from members of the class ‘Shakespeare: Page to Stage’ taught by Dr Joseph F. Stephenson in the summer of 2018, in particular Zula Pryor and Sydney Rubey. The author served as a graduate assistant for the course.

[1] All quotations from Hamlet are taken from Folger Digital Texts, edited by Barbara A. Mowat and Paul Werstine, www.folgerdigitaltexts.org/html/Ham.html.

Parker T. Gordon is a PhD student in the School of English at the University of St Andrews. His thesis examines literary and musical creative collaborations in twentieth-century drama, especially the pageant works of E. M. Forster, T. S. Eliot, and Charles Williams. In addition to his research, Parker regularly performs as a musician in St Andrews and is directing a production of Mozart’s opera The Marriage of Figaro for March 2019.
View all posts by Parker Gordon →
There are no comments published yet.